With B.C.'s public indoor mask mandate being repealed as of midnight, along with the easing of other restrictions, Dr. Bonnie Henry said it's unlikely that transmission of COVID-19 will spike in the near future.

Dr. Henry said the province is in a “transition phase,” as cases and hospitalizations have dropped in recent months. But while the risk of infection is now lower than it has been, due to widespread vaccination among British Columbians, she noted the risk is not zero.

“We need to be ready and prepared for what the virus may bring next and there are many different scenarios that we are working through to make sure we understand the potential, particularly as we go into the fall,” Dr. Henry said.

“Our risks now are much lower, they're not zero. We're not fully out of this yet, but I feel confident that we can safely make some further changes.”

While masks will no longer be mandatory in most public indoor spaces, some areas like healthcare settings and physician's offices will still require mask usage.

In addition to the repealing of the mask mandate, changes will be made for K-12 schools upon students return to class following spring break, and masks will no longer be required in class. Additionally, the vaccine card program that's been required at certain businesses will be repealed as of April 8.

She said the province is taking a "step-wise and measured" approach to repealing B.C.'s COVID measures.

But Dr. Henry said individual businesses, and companies like BC Transit or BC Ferries, can still decide to require masks if they choose, or the use of the vaccine card “in certain settings.”

“We may see a slight increase in cases but I don't expect to see a jump,” Dr. Henry said. “It's unlikely that we're going to see a spike right now because of the high level of immunity that we have.”

But while she's confident in the short term, the longer term is more uncertain.

“That's why I'm looking towards the fall and our respiratory season because that's where the higher risk potential is,” she said.

“We may have to bring back some of those additional measures, or we may have to have a new vaccine program. I suspect we may need a targeted vaccine program depending on who's getting infected. It may be an additional dose for our elders, seniors, people in long-term care. So those are the things that we don't yet know.”

Health Minister Adrian Dix noted that in addition to widespread vaccination, British Columbians now have more access to rapid tests. The free rapid tests available at B.C. pharmacies will become available to those 50 and older as of Friday.

As of midnight, face coverings will no longer be required in public indoor spaces in British Columbia.

Dr. Bonnie Henry announced the repealing of the order during Thursday's press conference, along with the easing of a handful of other COVID-19 restrictions.

Restrictions on long-term care visitation will also be lifted as of Friday, along with capacity limits on faith gatherings and restrictions on overnight child and youth camping.

The province is also revising its childcare and K-12 school guidelines, which will take effect when kids return to class after spring break.

In addition, Dr. Henry announced the vaccine card will no longer be required as of April 8.

The changes come as transmission of COVID-19 has dropped across the province, and the country, in recent months, following the surge of Omicron cases in January.

Dr. Henry says B.C. is one of the most vaccinated jurisdictions in the world, estimating that more than 90% of the population have either been vaccinated or infected with the virus.

With 405 COVID-positive people currently hospitalized in the province, B.C. has one one of the lowest per capita hospitalization rates in the country.

The move comes as other provinces, and jurisdictions around the world, have taken steps to repeal COVID-19 measures.

B.C. repealed its mask mandate back in July of last year, when COVID-19 cases were dropping, but the order was put back in place the following month when case counts rose once again.

It is expected that B.C. will be dropping its indoor mask mandate this week.

CTV News is reporting that provincial health officer Dr. Bonnie Henry will announce at Thursday’s afternoon briefing that the mask mandate will lift on Friday.

The vaccine passport program will then be lifted in April.

The provincial government has not confirmed either date, but has suggested restrictions will be lifted.

Castanet will livestream the news conference at 12:30 p.m.

British Columbia's public health officer is scheduled to hold a COVID-19 briefing today after indicating earlier this month that more restrictions could be lifted by mid-March.

She said hospitalization numbers were down, immunity from vaccines was up and more at-home rapid tests were being distributed.

But Henry has also said there was still a lot of the virus circulating in some parts of the province.

Unlike some other provinces, B.C. still requires masks in indoor public places and vaccine cards must be shown.

Ontario, for example, has already lifted all capacity limits and proof of vaccination, while it plans to end mask mandates in most places like restaurants on March 21. 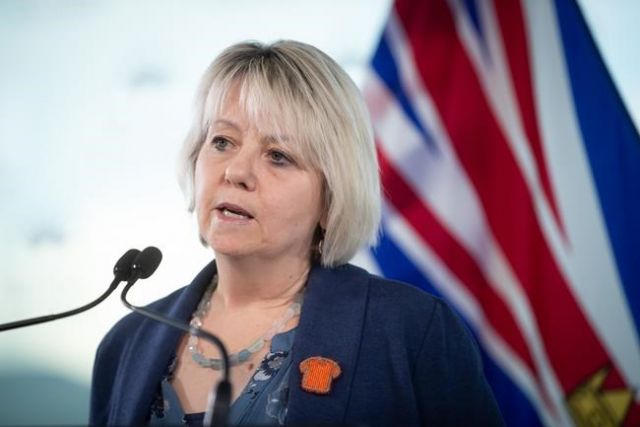