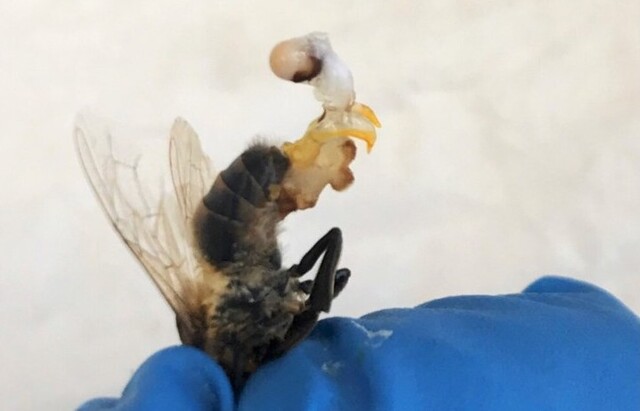 Photo: Dr. Alison McAfee
After drones mate with a queen, they always die after ejaculating. Why this happens when they die to heat stress is not clear.

At over 200 beats per second, the bees’ wings would have helped cool their tiny bodies as they desperately lugged water back to their colonies. Somewhere along the way, an untold number didn’t make it.

That morning, Huxter went out into her yard to check on her petite livestock. Dead drones everywhere, she remembers. In the grips of heat stress, their sex organs had exploded out of their bodies. The bees had ejaculated to death.

“It was unbelievable,” said Huxter, recounting the scene. “They have got all of their man parts out.”

Then she checked on roughly 300 starter hives where she rears queens, each worth hundreds of dollars. About 70 per cent were dead or missing.

“We had incredible losses. It was really scary,” she said. “Then we were like, ‘Oh my gosh, what's happening?’” 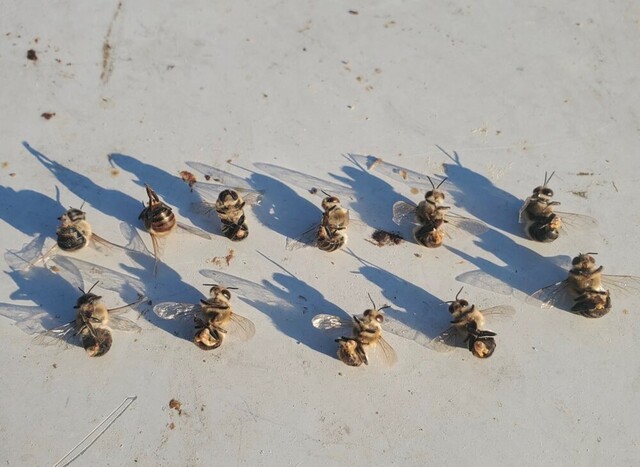 Photo: Emily Huxter
Emily Huxter found drones that had died during the heat wave had ejected their sex organs, ejaculating to death.

Huxter called up University of British Columbia researcher Alison McAfee, who as a post-doctoral student at the BeeHIVE Research Centre, had run experiments on how bees respond to heat. At 40 degrees Celsius, McAfee explained, heat stress affects a bee's ability to mate; by 42 C, at least half of drones have been found to spontaneously ejaculate and die for some reason experts haven’t figured out.

Within weeks, climate scientists found the heat wave that scorched B.C. and the U.S. Pacific Northwest was made 150 times more likely due to climate change; by the 2040s, its record temperatures could return every five to 10 years.

Such extreme heat threatens more than bees or the honey they produce. The Armstrong bee farm is part of a network of beekeepers that provide pollination services for crops worth an estimated $5 billion a year in Canada.

Every year, Huxter drives her colonies across the Okanagan Valley, helping to pollinate cherry, apple and plum trees from near the U.S. border in Osoyoos up to Vernon.

A second-generation beekeeper, Huxter’s farm also rears queens for other beekeepers across Canada, helping to backfill the winter losses colonies experience every year in the Prairies or Ontario.

It’s all part of a push to make the industry more self-sufficient and wean Canadian beekeepers off queens imported from places like Australia or the United States.

Rising temperatures, said Huxter, is threatening that vision. So after the June losses, the beekeeper thought to herself, “How can we do things better?”

During the heat wave, desperation had driven Huxter to layer polystyrene (brand name Styrofoam) on top of the hive boxes. Other beekeepers she knew had tried adding sugar syrup to the hives, which would ostensibly evaporate and cool the colony.

“I thought, ‘Hmm, I wonder if that's a good idea or not?” Huxter told Glacier Media.

A month later, in the lead up to another heat wave, Huxter decided it was time to figure out what was the best way to protect her buzzing livestock. She reached out to McAfee to help design an experiment. 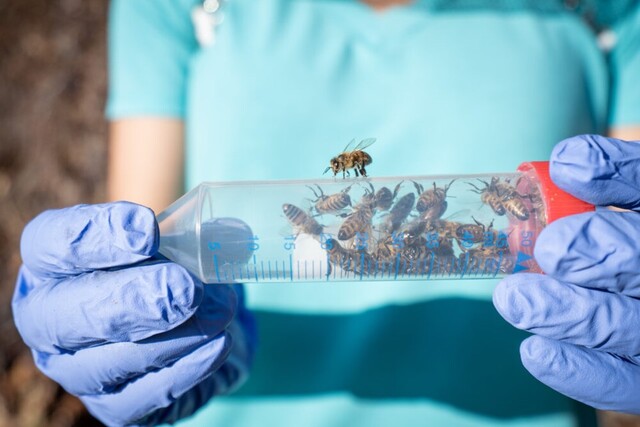 McAfee suggested running six starter hives with two-inch-thick pieces of polystyrene insulation on top to protect them from the sun. Huxter suggested giving another six hives a steady drip of sugar syrup. A third group got nothing.

Next, Huxter installed temperature loggers McAfee had sent her in each of the hives as well as one on a nearby solar panel to record ambient air temperature.

From July 28 to Aug. 9, they recorded temperatures in the hives every 10 minutes.

Over that 12-day period, the outside ambient temperatures climbed to 35.5 C. But inside the hives, internal temperatures ranged from 14.5 C to 41.5 C, with the highest temperatures found in the untreated hives.

When she went to analyze the data, McAfee found the syrup-fed hives reduced average daily high temperatures by 1.1 C, a difference she described as “not significant” in the beekeeper industry newsletter “Hivelights.”

The polystyrene cover, on the other hand, dropped average daily highs by 3.8 C, a “significant reduction.”

“It actually made the difference of having dangerous temperatures inside the hive to bringing it down below that threshold,” McAfee told Glacier Media. 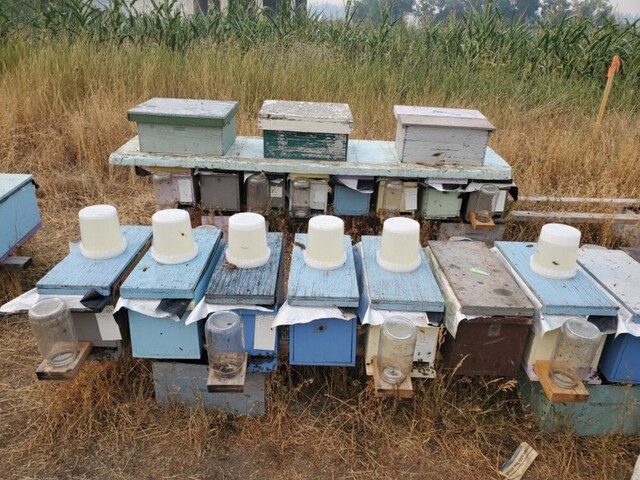 Since then, Huxter has redesigned all of her hives with two-inch polystyrene lids, a cheap and simple solution that helps the bees get through the winter too.

Both McAfee and Huxter doubt the insulation will be enough to protect bee colonies from the kind of extreme heat wave seen at the end of June.

“It’s one step towards getting better at managing the colonies under these extreme conditions that we should really only expect to increase in the future,” said McAfee.

Both women agree they need to keep experimenting, not least of all with alternative insulation materials that are more environmentally friendly.

“Maybe it's doing that trapped air, you know, like a wood-air-wood sandwich-type idea,” speculated Huxter, who is also looking to reach out to Australian beekeepers to understand how they adapt their colonies to extreme temperatures.

And while the sugar syrup didn’t show a large effect on the mini hives, it might still help the more mature colonies. 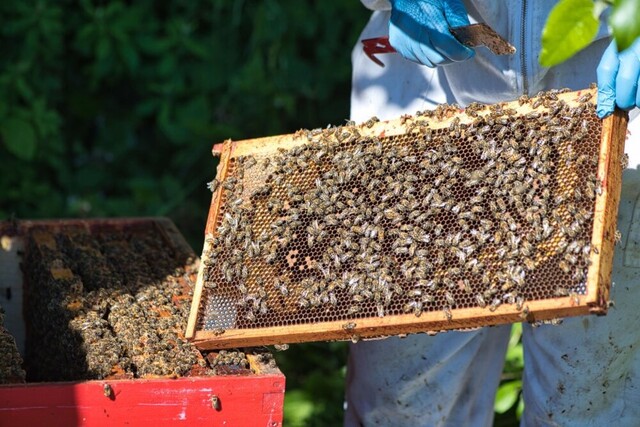 In some ways, water is going to matter more as temperatures climb: find the right distance to a lake or pond and bees can reach its waters to stay cool in the summer and get just enough of its cooling effect in the spring.

For now, Huxter is hoping Styrofoam and her network of kiddie pools will protect her young queens and drones across her farm’s 30 colony sites.

Over the last several decades, beekeeping has faced a number of challenges, from the arrival of pathogens and pests into Canadian colonies to poor nutrition.

“They have all these other problems. And climate change hasn't really been considered to be a major challenge for them in the past,” said McAfee.

That's because bees are good at staying warm. On Huxter’s farm, the colonies regularly raise internal hive temperatures from -20 C to 18 C to survive Armstrong’s frigid winters. But as increasingly hot and dry summers take hold, cooling down a colony is more difficult.

“They're not designed to do that as well,” said Huxter.

As a warming planet threatens food systems across the world, beekeepers like Huxter are looking to fight back with their own adaptations. Their success will be a crucial factor determining how much fresh food British Columbians see on their grocery store shelves.

“We're trying to transition in B.C. to being a self-sustaining industry,” she said. “And that's going to be really difficult as temperatures rise.”