The B.C. government announced the creation of a new ministry Friday – the Ministry of Land, Water and Resource Stewardship.

The province says changes in the environment, society, technology and the economy has driven the need to change how government handles the sector.

As a result, in November 2020, Premier John Horgan directed Minister of State Nathan Cullen to create a new ministry in the natural resource sector.

Horgan has appointed MLA Josie Osborne as the first minister of the new ministry. She represents the people of the Mid Island-Pacific Rim riding, and was previously the minister of Municipal Affairs.

After consulting with the 7,000 staff in the province's natural resources ministries, along with First Nations and industry stakeholders, the new ministry will come online April 1.

While about 1,130 staff will be transferred to the new ministry from other existing ministries, another 90 new staff members will be hired to fill new roles.

The new Ministry of Land, Water and Resource Stewardship will be responsible for working with First Nations to co-manage land and resources, protecting drinking water and other water policy strategies, working with the federal Department of Fisheries and Oceans to manage fisheries and managing provincial species at risk policies, among other things.

The new Ministry of Forests will now work on modernizing forest policy and “enhance focus” for year-long BC Wildfire Service, flood and dike management.

Katrine Conroy, MLA for the West Kootenays riding, will continue to serve as the minister of the Ministry of Forests. Premier Horgan says the ministry will take on new responsibilities for wildfires, which will see more focus on year-round wildfire prevention and management. 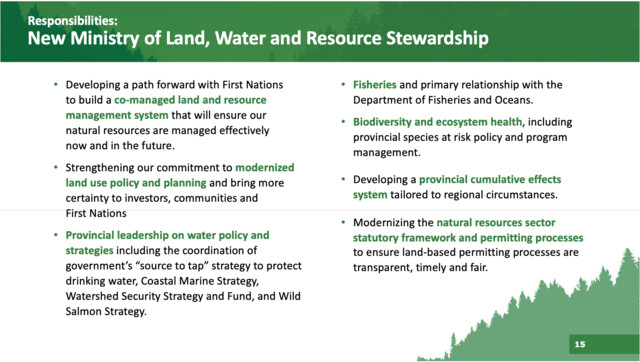 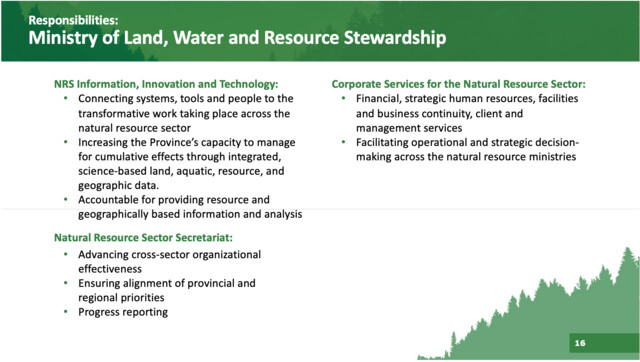