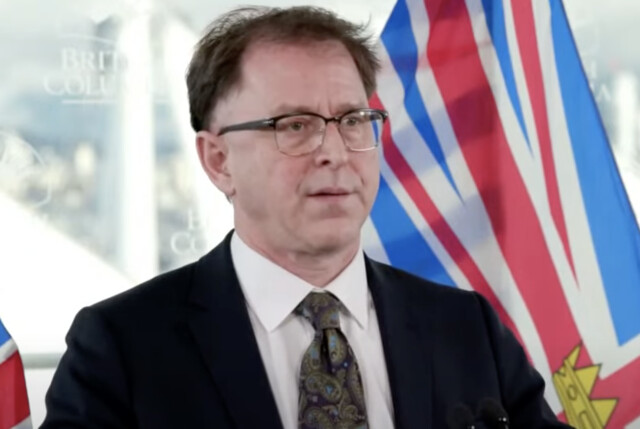 It was a news conference about expanding college and university spaces for nursing students, but B.C.’s health minister started it off with a comment about what’s been happening at protests in Ottawa and in this province.

“It is not freedom to attack other people’s freedoms and rights,” Dix said.

He called the actions of police in Ottawa and B.C. appropriate and necessary.

Two of the events Dix was referring to involved protesters yelling at and at spitting at journalists who were covering anti-mandate rallies near the Canada-U.S.border in Surrey and in the Okanagan on Saturday.

Dix also referenced the confrontation between a woman and some high school students in Oliver last week, which saw the woman fined $2,300.

Yasmin Gandham of Global News Okanagan tweeted Saturday that she was spat at and called a liar and "fake news" while covering the weekly freedom convoy that travels down Highway 97.

Being spit on, having my physical appearance scrutinized, called a liar and “fake news” - just a few of the interactions at the protests in Osoyoos.

As a journalist, we work to be unbiased and report on fact but no matter what your beliefs are, this behaviour is unjustified. pic.twitter.com/CqE7tTYWa6

Kamil Karamali, also of Global News, shared footage of him and his colleague being yelled at, spat at and then escorted to their vehicles by police. They were blocked in by demonstrators before they were able to drive out of the area. Surrey RCMP has launched an investigation into the treatment of journalists at the event.

My camera operator and I get swarmed by protesters and followed — after an interview with police media relations.

Officers escort us to our vehicle after we receive verbal threats. #bcpoli #TruckerConvoy pic.twitter.com/280fzoq2UD

Dix was later asked about protesters gathering outside the home of Port Coquitlam MLA and Public Safety Minister Mike Farnworth.

“There are no freedoms without responsibilities. Part of our responsibility to one another is not in exercising and chanting freedom to abuse other people’s freedoms. That doesn’t work,” Dix said.

Dix then went on to highlight that 93 per cent of adults in this province have been vaccinated against COVID-19 and said while there are divisions, the divisions are 16-1.

“That doesn’t mean the one can’t speak its mind or that person’s mind. But it doesn’t mean they can say that we’re going to continue to interfere with other people's freedoms until you change the policy. Policies have been open, generous and effective in B.C," Dix said.

Dix added that nurses in the public health care system have provided some of the most outstanding care to unvaccinated patients.

He also made it clear that some pandemic restrictions were lifted last week not because of people shouting abuse, but because of the actions of British Columbians who followed public health guidelines and orders.