Supreme gas prices top $2 a litre in BC, regular fuel not far behind in many locations 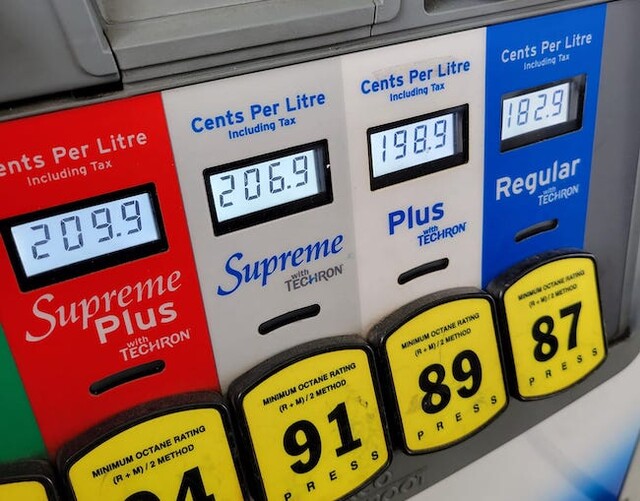 Gas prices have topped $2 a litre for supreme fuel and are inching closer to that mark for regular fuel as well in many cities across B.C.

Fuel price watchdog gasbuddy.com reports prices in B.C. are up an average of 8.5 cents since last month and a whopping 44 cents compared to a year ago.

Gas stations across the Lower Mainland appear to be averaging 182.9 cents a litre for regular fuel as of Wednesday.

Prices are all over the map, with some stations at 171.9 in Burnaby, the regions lowest, compared to 178.9 in Coquitlam, and 179.9 in North Vancouver at the lowest priced locations.

Heading out into the Fraser Valley, pumps showed supreme fuel at 206.9 cents a litre and supreme plus at a wallet-emptying 209.9 in Maple Ridge.

Farther out into the valley, regular fuel is currently selling for 153.9 to 177.9 cents a litre in Chilliwack, typically one of the lowest priced cities in the region.

In the Southern Interior, Kelowna currently has the lowest priced fuel, thanks in part to the recent opening of a Costco station, where regular gas is going for 149.9 cents a litre. Prices across the city range upwards from there to a high of 157.9 as of midday.

Travelling to the coast? If you stop in Merritt expect to pay anywhere from 157.9 to 169.9 cents a litre, depending on the station.

Nationally, prices are the highest since Gas Buddy began keeping records in 2008.

It's the seventh straight week the nation’s average gas price has climbed, the site reports.

The Canadian Press reports March crude oil contracts are up US$2.72 at US$94.79.

Wondering where the cheapest gas in B.C. is? It's Dawson Creek, where regular fuel is relative bargain at 142.9.