BC mute on Dr. Ballem pay 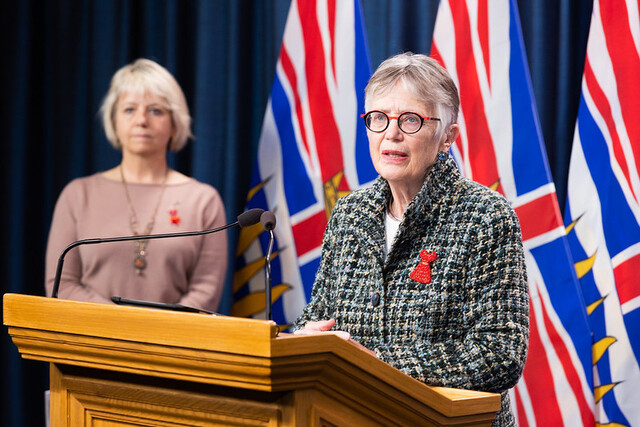 Documents obtained under the freedom of information law show that Dr. Penny Ballem, the head of the province’s COVID-19 vaccination campaign, charged taxpayers $405,000 last January through September for her services.

Ballem was originally given the $250-an-hour, no-bid contract in January 2021 for 10 months at a maximum $220,000 through her numbered company that does business as Pendru Consulting. However, the program went into overtime when a children’s vaccine received approval and the Omicron variant led to a booster shot campaign for adults.

When asked for the cost of the more recent payments to Ballem, as well as the overall budget for the ImmunizeBC mass-vaccination program, Art Aronson of the government’s Communications and Public Engagement branch refused to answer. Instead, he said it would be necessary to submit a $10 freedom-of-information request, a move that could take weeks and perhaps months to be answered.

Ballem is a former deputy health minister under the BC Liberals from 2001 to 2006 who spent seven years as Vancouver’s city manager under Mayor Gregor Robertson. She did not respond for comment.

In December, Health Minister Adrian Dix rewarded her with three more years as chair of Vancouver Coastal Health Authority. For the year ended last March 31, she was paid $55,309, which includes a stipend, meeting fees and expense reimbursement.

Meanwhile, the Provincial Health Services Authority (PHSA) is refusing to explain how Dr. Bonnie Henry was allowed to co-author a book about her work as the Provincial Health Officer during the pandemic’s first wave. The title, “Be Kind, Be Calm, Be Safe: Four Weeks That Shaped a Pandemic,” was published in March 2021.

A copy of Henry’s Provincial Health Officer (PHO) contract, obtained under the freedom of information law, includes clauses about confidentiality, conflict of interest and intellectual property belonging to the province. The contract sets the terms of her secondment to the Ministry of Health, where she became PHO by NDP cabinet order in early 2018. PHSA communications officer Andrea Visscher referred questions to the Health Ministry’s communications office, which did not respond by deadline.

Publisher Allen Lane, a Penguin Random House Canada subsidiary, said in late 2020 that Henry would donate her advance payment to First Book Canada, a charity that distributes books to underprivileged children. The dollar amount was not disclosed and Henry refused to release her contract after an FOI request.

She claimed to have written the book as a private citizen, but she promoted the book with national media interviews during office time and with the help of a public relations contractor paid via the Ministry of Health.

Last November, the NDP government imposed a $10 application fee for public records after ramming through controversial amendments to the openness law that the party created 29 years ago.

On Wednesday, Green Party MLA Adam Olsen (Saanich North and the Islands) asked Speaker Raj Chouhan to investigate Lisa Beare, the NDP minister whose department is responsible for the freedom-of-information law. Olsen alleged Beare committed contempt of Parliament for intentionally misleading the legislature about the new $10 fee under the amended law.

He said that Beare suggested on the final day of the fall sitting that no decision had been made about the fee and hinted that there could be more public consultation. Instead, the cabinet order setting the fee had been published days earlier, the morning after the FOI law amendments received royal assent

“The minister repeated time and again that she was listening and would continue to listen right up to the end of the debate on the last day of session, then somehow had an order-in-council ready to go with an amount already determined and reportedly signed shortly after the assembly adjourned,” Olsen said.

Beare reserved her right to reply.

Jason Woywada, the executive director of the B.C. Freedom of Information and Privacy Association, calls the $10 charge-per-request a “transparency tax.” It earned Premier John Horgan’s government the tongue-in-cheek Code of Silence Award this week for outstanding achievement in government secrecy from the Canadian Association of Journalists.

“They have the option of releasing the information in the public interest and do so when it suits their purpose and supports their spin,” Woywada said. “When they fear their actions are unable to be defended in the public, they hide behind the FOI process as a barrier.”