Seal out of bounds on links 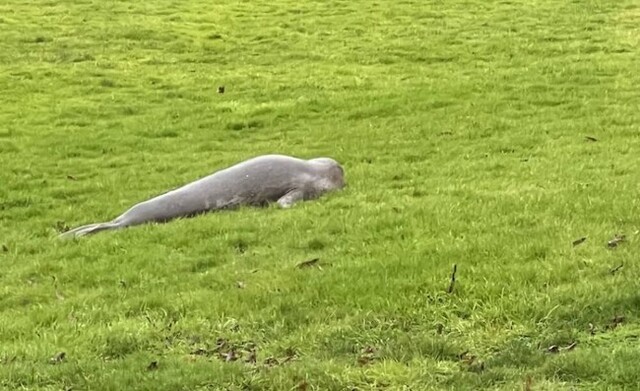 Animal Control Services wrangled a seal on dry land Sunday, after it was called to the Gorge Vale Golf Course for a mammal that was decidedly out of bounds.

Catherine Hodgins, who lives alongside the first hole at the course, said the seal was spotted by golfers in the afternoon.

“I happened to look out the basement window and saw a golfer looking towards our house and couldn’t figure out why,” Hodgins said. “When I stood at the patio door I realized that a seal was there. This seal would go along and then stop and rest which looked a lot like collapse from exhaustion.”

Hodgins thought the seal must have come from a creek near the golf course.

“There is a culvert that comes from the Gorge Waterway to the creek near the golf course,” she said.

She last saw the seal heading south toward the second hole and called Animal Control.

“You could see that it was pacing itself and struggling a bit,” she added.

In that case a seal was first rescued from View Royal’s Centennial Park and then was picked up later in the week in a Chancellor Avenue driveway.

View Royal firefighters responded to those calls, managed to get the seal on a tarp and carried it to an arm of Portage Inlet.

“They’re pretty certain it’s the same one, and because the thing has been creating such a nuisance of (itself) DFO have asked us to contain it,” said Fraser, who noted it took some doing to wrangle the elephant seal across hundreds of yards of a wet and muddy golf course.

Fraser said they tend to be aggressive and they don’t like to be handled.

“They see us as a threat and they protect themselves,” he said. “They don’t move very well, but they have a lot of power and a lot of strength.”

Fraser said after they caught the seal they got a little help from his wife, golf club staff, a retired police officer and his wife to load it into a portable dog kennel for transport.

The animal will spend the night in the pound and Fisheries and Oceans officers are expected to pick it up in the morning.

Fraser said the elephant seal, likely early in its molting phase, will be taken by boat to a location where it will be released. He said it’s unlikely it will be back in this neck of the woods any time soon.

Fraser said the best guess as to why the elephant seal has been making its way onto dry land is it has something in its head that it should go ashore to molt.