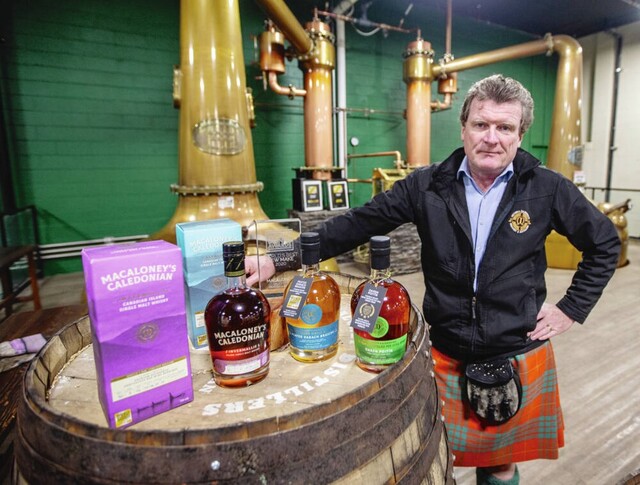 Photo: DARREN STONE, TIMES COLONIST
Graeme Macaloney, the founder of Macaloney's Caledonian Distillery, is locked in a battle with the Scotch Whisky Association over use of his name and other images on his whisky.

A David-versus-Goliath battle is heating up once again as a local craft distillery considers filing a trade complaint with German and European Union trade commissions after a threat of legal action scuttled its product’s distribution into Germany.

This is the latest salvo in an ongoing war between Victoria-based Macaloney’s Caledonian Distillery and the Scotch Whisky Association. The association, whose governing council is controlled by the four largest scotch whisky multi-national corporations, last year filed a lawsuit to prevent the Victoria craft distillery from using Macaloney (its founder’s name), the words Island, Glenloy, Invermallie and others in its whisky branding.

“The lawsuit is just ridiculous,” said Graeme Macaloney, who founded the whisky business that bears his name in 2016. “What they’re saying is that I can’t use my own name.”

He named the brand’s Glenloy and Invermallie whiskies after locations where his clan lived for more than 1,000 years.

This time, the association has threatened the distillery’s German distributor with a lawsuit unless they stop importing Macaloney’s Canadian Best single malt whiskies. The distributor has just informed him that it is complying, suspending the import of his products into Germany, a growing market.

This is not the first time a Canadian distillery has drawn the ire of the Scotch Whisky Association, which is known for its ferocity in protecting its share of the multibillion-dollar global whisky industry. It previously waged a losing nine-year fight with Glenora Distillery in Nova Scotia to stop that distillery from using the word Glen (Gaelic for valley) in the name of its single malt whisky. The Supreme Court of Canada subsequently dismissed an appeal made by the association, with costs, in 2009.

Apart from the backing of a legion of Caledonian Distillery fans, support for Macaloney has come from the industry itself.

Scottish whisky expert Ralfy Mitchell accused the association of “cultural appropriation for the benefit of a single industry.”

“It seems that the Scottish Whisky Association is still ­harassing and scaring people who are of no threat to it at all or its country’s whiskies,” said Dominic Roskrow, a U.K. whisky writer.

Macaloney said he still needs to consult with stakeholders before he proceeds, but is urging supporters and whisky lovers to sign a petition letter to ramp up public pressure against what he calls a punitive lawsuit. Almost 1,000 letters have been sent so far, speaking against the association’s actions.

“We’re not trying to steal any customers from them. If anything small craft distilleries like ours are introducing so many new people to the industry,” said Macaloney, who is the official historian — or Seanchaidh — for his clan in Canada.