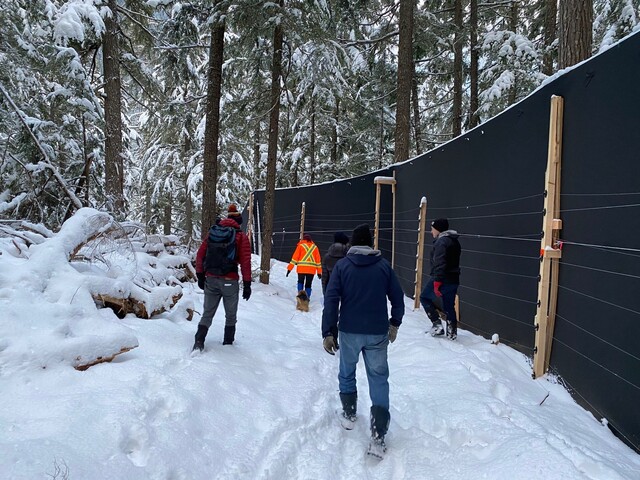 A conservation group in Nakusp has been given permission to operate a caribou maternity pen this spring.

The Arrow Lakes Caribou Society has built a fenced-in area near Nakusp to allow seven to eight females from the tiny Central Selkirk caribou herd to safely birth and care for their newborns, said one of the organizers.

“They are captured via helicopter by very specialized and expert crews, temporarily sedated and transported to a staging area near the maternity pen,” says Hugh Watt, describing the operation. “Final transport will probably be by snowmobile and skimmer to the pen where they quickly undergo assessment and then sedation is reversed.”

The capture operation will occur around mid-March, and the animals give birth in May. They’ll be released from the pen around August, Watt says. However, much of the timing depends on weather and snow conditions.

“There are many challenges to the capture, which are mitigated by thorough planning, training, and expert handling,” he says. “The exact release timing is usually dependent on how long calves have been in the pen and other parameters such as the temperature.”

The pen is located on a bench above the Nakusp Hot Springs, on municipal property. The Arrow Lakes Caribou Society has received funds to maintain and operate the pen this year. While they’ve secured core funding from the Province, Watt says they’re still applying for grants to fully pay for the project.

Watt says the maternity pen may represent one of the last best ways to save the endangered herd. Only 28 animals – 26 adults and two calves – were spotted in the area in 2021.

“The fact that this is the southernmost remaining herd of mountain caribou in North America makes this herd worthy of a lot of focus and effort,” says Watt, adding that conservation groups in the northern US were watching progress carefully. “There are no guarantees of success but it is worth the risk to try to help reverse the downward trends.”