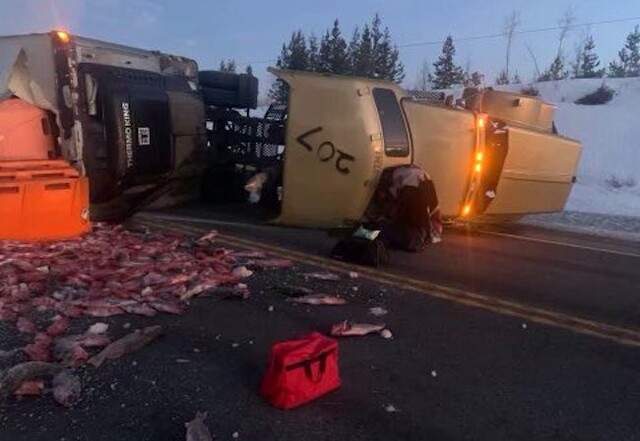 A rollover of a truck carrying a load of fish closed Highway 16 at Cluculz Lake, east of Vanderhoof, early Wednesday.

No injuries were reported, says North District RCMP Cpl. Madonna Saunderson, but it could take a while to clean up the mess.

"I have no idea (about how long the stretch will be closed), but having been involved at two crashes myself in years past involving a load of fish, it was shut down for hours.

"I have no idea how big this is and there's no timeline on when it will be open."

A single-lane detour for light traffic only is in place according to DriveBC.

If there is a blessing it's that the crash occurred at this time of year.

"At least it's not summertime where you've got to stand lethal overwatch for bears coming in to get the fish," Saunderson observed. "That's the one good point of this ... they're hibernating."