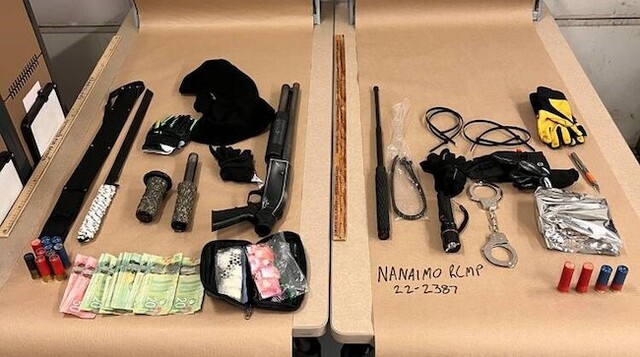 A Vernon man was arrested on Vancouver Island after police found weapons and a homemade bomb in a road stop of a suspicious vehicle without insurance.

Police were on patrol in the area of Bowen Road and Meredith Road early Saturday when they came across an older model Ford Focus and pulled it over.

The RCMP Explosives Disposal Unit was called and recommended the bomb be taken to a nearby field where its members could destroy it.

Charges are pending and the trio has been released.

“This is an excellent example of general-duty officers in Nanaimo conducting a thorough investigation of a suspicious vehicle that went from a straightforward charge under the Motor Vehicle Act for no insurance to apprehending three persons and getting several extremely dangerous weapons off the streets,” said Const. Gary O’Brien.