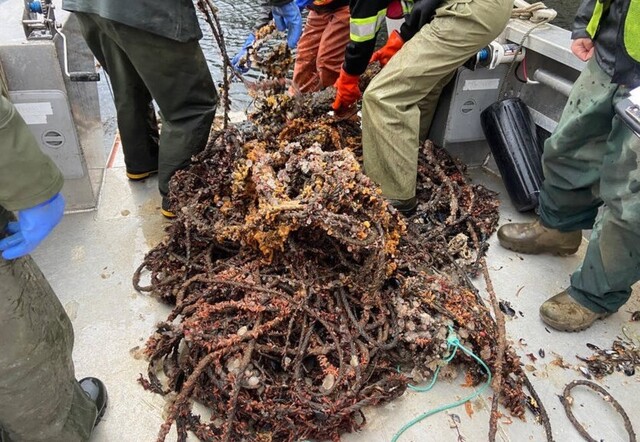 Photo: Coastal Restoration Society
First Nations members near Opitsaht on Meares Island haul out rope and crab pots as a diver brings more debris out of the water.

Abandoned oyster and other aquaculture farms off the west coast of Vancouver Island are a toxic and ­tangled mess — and death traps to salmon, herring, marine mammals and myriad sea life.

Nobody really knows how many are out there, sunken in bays and inlets, leaking polystyrene pellets and petroleum products.

Josh Temple, executive director of the Tofino-based Coastal Restoration Society, says there are “dozens, possibly hundreds” of the sites along the B.C. coast. Many have been torn apart by time and storms and ­hidden under the surface, and they represent a constant state of danger to fragile species and ecosystems.

The federal government is starting to catalogue marine sites of concern, collecting data from its ­licensing records and observations from flyovers by its various agencies, said Temple. Reports from locals are also being documented so the most serious sites are identified for cleanups.

Bivalve aquaculture has been a going concern for millennia, and the modern form of floated docks and diesel engines for several decades. But many were abandoned during the 1960s and 1970s without being dismantled.

Last year, the Coastal Restoration Society pulled debris from three abandoned oyster farms in Nootka Sound and another in Clayoquot Sound on the west coast of the Island.

While starting one of those projects at Oos Point in Nootka Sound, Temple noticed a large piece of the ­original docking was missing, likely torn away by recent winds and storms.

A few months later, a large section of the floating dock was found 60 nautical miles north near ­Estevan Point during a helicopter survey. “We found the ­original infrastructure washed up on the beach, where [the polystyrene floats] had just exploded over about a ­kilometre-long area,” said Temple. “It was a ­massive and expensive cleanup and everything had to be removed by helicopter.”

“That’s why it’s so critical to identify these sites and clean them up — in their original locations,” said ­Temple.

Abandoned fishing gear, netting and ropes attached to dock floats are an extreme danger to endangered grey whales and southern resident killer whales, said Temple. And the recovering humpback whale ­populations that frequent inland seas of the Island are prone to entanglements, which can cause exhaustion and eventual drowning.

But it’s the petroleum-based polystyrene floats, often called Styrofoam, that represent a more widespread threat as the foam breaks into millions of tiny pieces and contains toxins that kill critical fish stocks.

The Coastal Restoration Society was also doing a cleanup project with the Tla-o-qui-aht First Nation at Opitsaht across from Tofino Harbour, pulling derelict crab pots, barrels and old floats, when it discovered two sunken oyster farms “nobody even knew were there,” said Temple.

‘OUR LAND IS OUR GARDEN’

Some of the funding for those cleanup projects came through the federal government’s Ghost Gear Program, which works with contractors, First Nations and other coastal communities to clean up ocean debris and lost or abandoned fishing gear that’s harming fish stocks and marine mammals on the east, west and Arctic coasts. It was launched in 2019 with an $8.3-million budget that was increased to $10 million for 2021-22.

So far, the Ghost Gear Program has helped remove nearly 740 tonnes of abandoned, lost or discarded fishing gear from Canada’s Atlantic and Pacific coasts — the equivalent weight of 231 Zambonis.

That includes more than 118 kilometres of rope, almost enough to stretch from Victoria to Parksville.

The federal government allotted funds to 37 contractors and First Nations communities across the country in its latest Ghost Gear funding, with the Coastal Restoration Society receiving the largest amount at $700,000. Others from the Island included the Emerald Sea Protection Society ($235,000) and the Malahat Nation ($336,000) — both for finding lost fish gear; and Natural Resources Consultants of Campbell River, which received $150,000 for lost-net response and diver training to retrieve lost gear.

The program has created more than 300 jobs on both coasts, many in First Nations communities, including the Ahousaht in Clayoquot Sound, where the Coastal Restoration Society spent weeks cleaning up an old aquaculture farm near Oyster Island.

George John, director of the shore crews at the cleanup site, says there is a lot of seafood in the area that needs to be protected. “It’s important we all start loving the land the way it should be loved.”

Complementing the feds’ program is the province’s Clean Coast Clean Water initiative. Launched during the pandemic, it provided funds to First Nations and re-purposed tourism operators and their boats to begin the biggest ocean cleanup in B.C.’s history. It created 250 jobs, cleaned 394 kilometres of shoreline and collected thousands of tonnes of debris detrimental to fish and marine mammals, about half of which was recycled.

Dave Miller, fisheries manager for the Ehattesaht First Nation in Nootka, said the cleanups are essential. “Our land is our backyard .. it’s our garden,” he said. “The debris has been on our beaches for some time and it’s important for us to start getting to work to hep our environment and the fish and everything else that we survive off of for our nation.”

Cleaning up an abandoned oyster farm can take one to three weeks, depending on the amount of debris. The Oyster Island project was the most complex, filling four 100-foot barges. The site was laden with batteries and petroleum products, massive pieces of polystyrene and dock frames, said Temple.

The process starts with locating the cleanup site, communicating with the First Nation with territorial rights and discussing a formal agreement for restoration.

Temple said the society then liaises with the Department of Fisheries and Oceans, provincial ministries and Transport Canada on the status of the licence holder — whether it is still active or abandoned — the safe operation of a barge, employment contracts with First Nations, deployment of booms and the safe transportation and disposal of the debris.

The Coastal Restoration Society has been the leader in dismantling former aquaculture sites, said Temple, as it has collaborated with WorkSafe B.C. and the federal government on occupational health standards and procedures on how best to keep workers safe in the complicated process.

Temple said surface infrastructure is removed first, and remotely operated diving vehicles and other sensors are deployed to view the underwater site. Dive teams are deployed only when necessary, he said.

SO, WHERE DOES IT ALL GO?

Debris from the oyster-farm projects was offloaded at Gold River and Tofino and trucked to sorting sites. Under the Ghost Gear program, Ocean Legacy — a non-profit based in Steveston — has depots in Powell River and Ucluelet, where debris is sorted into recycling categories.

Debris that is too eroded to be recycled goes intothe landfill. Recyclable steel parts are sent to Schnitzer Steel on the Island.

“All of the cleanups occurring on the west coast of British Columbia come through our facility, where they get size-reduced and re-pelletized for manufacturing purposes,” said Chloe Dubois, president of Ocean Legacy. “We are enabling new systems to take these materials and do something really positive with them and get them recirculating back into a closed- loop system.”

Currently, the Steveston facility is managing 11 streams of debris, including the remnants of shoes, dock tires filled with expanding foam and crab pots.

Dubois said Ocean Legacy is working with manufacturing companies in Canada, the U.S., Brazil and Europe that are planning to turn its “Legacy Plastics” into sunglasses, kayak seats and paddles, picture frames and wall art — even guitar pics.

“We’re also looking to work with the automotive, and outdoor and recreation sectors on long-term products that are recyclable,” she said.

Tim Niemier, founder of Ocean Kayak and Origami Paddler, said he supports the gathering of plastic from the ocean to be recycled into paddles and other items “to be used by paddlers who love the water they paddle in.”

“As a business owner and a human, I feel that it is my responsibility to help leave our paddling environment cleaner than when we started paddling,” he said. “This project cleans the environment and makes recycling commercially profitable, which means that it can be economically sustainable.”