Vaccination, current widespread Omicron transmission in B.C. could make for a "much more gentle summer" in 2022 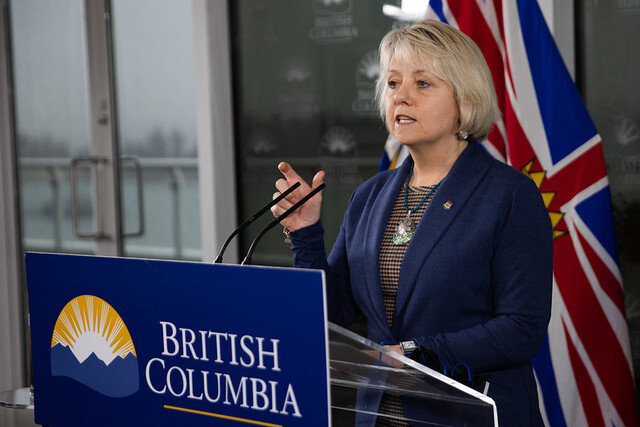 British Columbia could be in a good place when it comes to the COVID-19 pandemic come this summer, due to widespread vaccination and the current transmission of the Omicron variant throughout much of society, according to Dr. Bonnie Henry.

During Friday's press conference, Dr. Henry announced a new approach to handling the pandemic in the province, as the rapid spread of the Omicron variant has made contact tracing an ineffective measure to slow transmission.

She also presented new data from recent B.C. COVID hospitalizations that show for most people who are vaccinated for the virus, the Omicron variant present a “negligible” risk of serious illness and hospitalization.

“I absolutely recognize this is a shift and it means we have to change our way of thinking that we have been working on so intently together for the last two years,” Dr. Henry said. “But we are all familiar with these new measures, they're much more like how we manage other respiratory illnesses.

“We cannot eliminate all risk and I think that's something we need to understand and accept as this virus has changed and has become part of what we will be living with for years to come.”

Looking towards the future, Dr. Henry said she believes we'll be living with the virus for years to come, but historically, respiratory viruses tend to reduce in severity as it mutates.

“I do hope that we will end up with another coronavirus that causes mostly mild illness, but it may be that people who are in that older age group or people who have immune-compromising conditions will need to have periodic boosters,” she said.

“And it may be that most of us who've now had the three doses won't need to have periodic boosters. Those are the things that we don't yet know, but those are possibilities that we need to start thinking about now.”

With unprecedented levels of transmission across the province in recent weeks, which is likely undercounted by the daily case counts as government PCR testing has been overwhelmed, Dr. Henry said many people will have stronger immunity to the virus moving forward, when combined with vaccination.

“Because of the amount of transmission we've seen and the amount of immunity that we've developed from vaccination and from the transmission of Omicron, we're probably going to have a much more gentle summer than we've had for the last two summers,” she said. “So that will be good, and then we'll have to prepare ourselves for whatever comes next in the fall.”

She also noted that further evidence has shown that the six-month interval between second and third doses of the vaccine appear to provide better long-term protection to the virus.

“We've maintained that six-month interval [between second and third doses] because we've had ongoing evidence and increasing evidence that that gives us longer lasting protection, so that is going to help for whatever comes next,” she said.

“Because there will be something next. I do believe we are going to be living with this virus.”