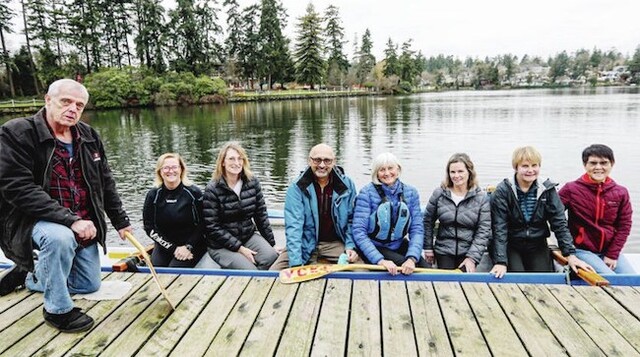 A couple’s leisurely walk along Victoria's Gorge waterway turned into a rescue mission for an elderly dog on Tuesday.

Art and Adele Wood, both dedicated walkers in their 60s, were taking one of their daily strolls just after noon when they came upon a woman clapping and cheering on a group of six paddlers from Victoria Canoe and Kayak Club in a canoe outfitted with an outrigger.

Suddenly, the woman’s small dog stumbled and fell off the walkway into the water, about 2.5 metres below.

She called for help, saying the 17-year-old dog couldn’t swim and was going deaf and blind.

Art Wood said he ran over to the edge and looked down. “The dog was having a hard time paddling and kept sinking — struggling to keep his head up to breathe,” said Wood.

The paddlers had turned around after hearing the cries for help, but Wood said he didn’t think they would make it to the dog before the animal drowned. “I love animals and couldn’t let this happen.”

Wood handed his wife his jacket and started climbing down the waterway wall. He let go into what he thought was a metre of water but turned out to be a lot deeper, and ended up treading water.

Luckily, his foot touched a submerged boulder that he was able to stand on for stability. “I was able to grab the dog and hold him against that rock wall and calm him down,” he said. “He was coughing up water, so I tilted him forward and patted him until he was breathing clearly.”

By this time, people had gathered on the walkway and were reaching down to get him to pass the dog up, but Wood was starting to lose his footing.

Just then, the paddlers, ­members of the Canoe and Kayak Club’s Riptide team, drew up alongside and took Wood and the dog into their boat.

They took their two wet and cold passengers to a nearby beach, where the owner was ­reunited with her dog, who was able to celebrate his 17th birthday on Wednesday.

The paddlers offered Art and Adele a ride back to the clubhouse, close to the corner of Gorge and Tillicum Roads, where the couple had parked their vehicle.

“Art deserves recognition for his kind and extremely brave actions,” said Angie Walters, one of the paddlers on the rescue boat.

She said the crew has already floated the idea that they should make the Woods honorary ­members of the club for their actions.

As for Wood, he took his dunking with good humour: “My polar bear swim was a little late but I got it in.”