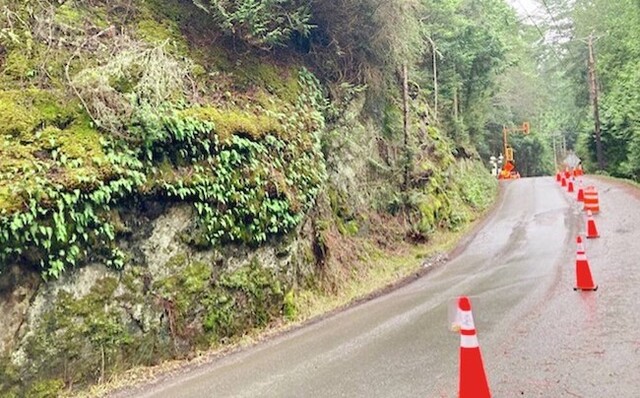 Some South Pender Island residents are rationing their heat after a weight restriction was placed on the area’s only access road, preventing many fuel-delivery trucks from reaching their homes.

The Ministry of Transportation and Infrastructure prohibited vehicles over 5,000 kilograms on a portion of Canal Road, near a trailhead to Mount Norman, after November’s heavy rains caused movement under the already deteriorating road.

The road is only open to a single lane of alternating traffic, with only one car allowed to pass at a time.

The ministry said in a statement it is trying to determine the scope of work required and hopes to repair the road between April and October this year.

That leaves people like John Jones who rely on oil for their heat and cooking wondering how they’ll make it through the winter until the road is fixed.

Jones has started rationing his oil use, because he doesn’t know if his next delivery, generally in February or early March, will reach him.

“It’s leading to an anxious situation. And I’m not the only one. We’re all wondering what’s going on,” said Jones, who has lived on South Pender for 33 years.

Over the weekend, a propane truck was brought over by barge, said South Pender Island trustee Steve Wright, but it’s not clear if that’s something that will be repeated.

Wright said the road had been slowly slipping for many years, and residents are frustrated that it’s come to this point.

Ministry crews have made small repairs over time by adding concrete to the road and creating a culvert to direct water away from the area, but adding that weight wasn’t helping the situation long-term, he said.

Wright said he noticed cracks opening in the road and empty space forming under the tarmac about 18 months ago. He has been in touch with the ministry since then.

While the ministry has been monitoring the road, Wright said he hasn’t seen much proactive planning “until the road actually slipped and they realized that it was going to be a dangerous situation. And I think that’s pretty unacceptable from a public perspective.”

Restaurant delivery trucks have been offloading goods to smaller trucks to get through the affected area, and people building homes can’t get a concrete truck in, Wright said.

There are about 120 homes on South Pender, according to the latest census, and one major business: Poets Cove Resort & Spa.

The ministry has been in talks with Parks Canada, which owns the land bordering the road, about moving the road uphill and away from the shoreline, Wright said.

Resident Kathryn Eagleheart said people have been frustrated by lack of information from the ministry on what’s happening with the road and when it will be fixed. She noted residents have been notified by B.C. Hydro of an upcoming planned power outage via email and regular mail, and questioned why the province hasn’t been more forthcoming.

“Somebody is making the decision that they have to put a weight limit, so somebody could be giving us that information directly,” she said.