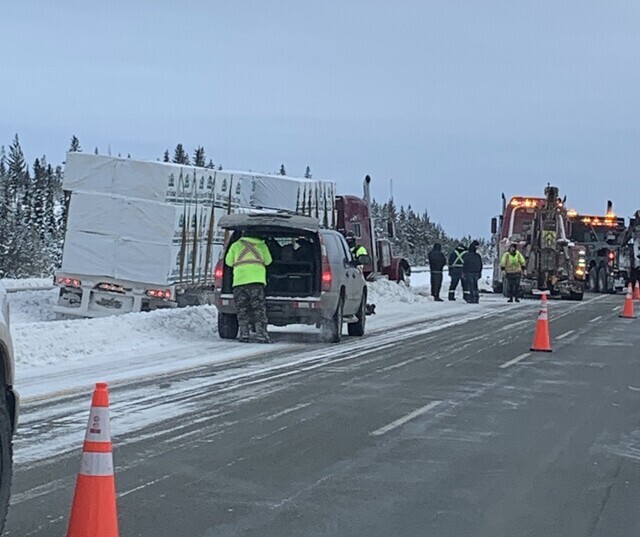 The Coquihalla Highway has been closed due to crashes multiple times over the past few weeks, and truckers have taken their concerns to the province.

BC Trucking Association President Dave Earle told Castanet they reached out to the Ministry of Transportation last week after conditions were especially poor Friday in the Hope area.

“Conditions over the weekend, in particular Friday, were really bad and we certainly had some concerns,” said Earle.

Currently, the Coquihalla highway is limited to commercial vehicles after opening last month following repairs to fix extensive damage caused during floods and mudslides in November.

There have been reports of some truckers speeding and passing where they shouldn’t.

Earle said drivers also have a responsibility to follow the rules of the road.

“It’s one of the things we see in the human condition when we try to do things as easy as we can and just to get it done. And it’s not that we have necessarily somebody hanging over us, it’s just the human condition. And we need to be smarter and be thoughtful and be thinking and saying, you know, let’s just back off here a little bit. This isn’t good driving, and let’s not push.

That’s the challenge, particularly as we try and find that new way of doing business with the routes the way they are. “

Earle notes that despite the recent concerns about winter maintenance on the Coquihalla, he still remains in awe of the work done to get the highway reopened as quickly as it was after the floods.

He also said transporting goods in this province is a long way from back to normal, even with a stretch of Highway 1 between Lytton and Spences Bridge expected to reopen for all types of vehicles on Friday.

“It’s just the reality. When Highway 1 reopens all the way through the Fraser Canyon it’s not going to look a lot like what it did before, particularly around Jackass Mountain, Jackass Summit, Tank Hill, all that area. It’s going to be different for a long time… It will take us a while to get back to that grade-separated, smooth running highway that we were all accustomed to for so many decades.”