'We have leveled off somewhat': Henry suggests peak of Omicron wave may not be far off 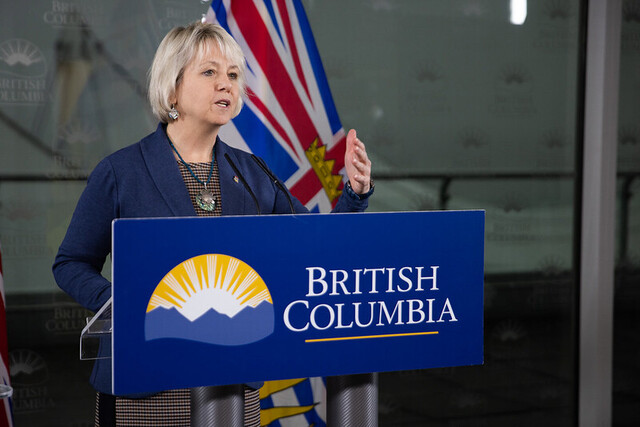 “I think we're getting the sense that we have leveled off somewhat,” Henry said during a media availability.

“We may be entering soon into the place where we will see a decline, and right now, our primary focus needs to be on keeping as much as possible open in our communities, and ensuring that we have that balance that our healthcare system is not getting overwhelmed — as stretched as it is.”

Scientists in the U.S. and Britain, which are further ahead in the Omicron wave, have also been seeing signs that infections will soon drop rapidly due to rising immunity from the spread of the virus.

Henry acknowledged that hospitalizations have been rising in recent weeks, which is why public health orders “are likely to remain unchanged" for the time being. More detailed modelling on hospitalizations will be released Friday.

"I want to encourage people this wave is moving quickly. And it means you need to do everything to protect yourself right now. And we know that this wave will move through quickly as well," Henry said.

"We tend to see this with any pathogen that has a shorter incubation period, you see these rapidly explosive growth, and you also see a rapid decrease once a certain level has been reached in the population."

She cautioned, however, that is far from a certainty and some other countries are having different, more severe, experiences with the Omicron wave.

While the Omicron variant is spreading widely in the vaccinated population, Henry said the vaccines are still able to prevent serious illness and death. Recent data shows people vaccinated with two doses are 60% to 70% less likely to be hospitalized with the virus six months after the second dose. A booster dose brings that to 80% to 90%, Henry added.

Both Henry and Health Minister Adrian Dix said they have no plans to mandate vaccines for all, when asked about a new health tax planned in Quebec for the unvaccinated.

Henry instead urged unvaccinated residents to get the jab for their own health.

“This strain of the virus is absolutely mostly mild in people who have the protection that vaccination offers. But if you are unvaccinated, you don't have that protection and your personal risk has gone up dramatically in some communities.”

She said there are currently three people in their 20s and one person in their 30s in B.C. intensive care units with COVID.

“That is a preventable illness. It creates a lot of distress for health care workers to be caring for young people and seeing them in so much distress when it can be prevented,” Henry said.

Those figures include people in hospital for all ailments.

Henry said B.C. is also anticipating the arrival of more treatment options in the form of antiviral medications that are under review by Health Canada.