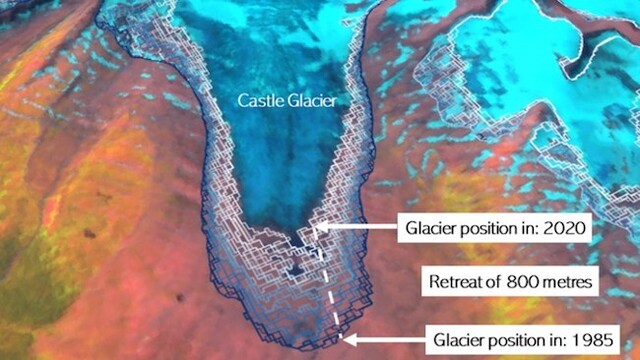 Western Canada's glaciers are shrinking more quickly, research from the University of Northern BC has revealed.

UNBC staff developed a method to systematically map and analyze changes in glacier and proglacial lakes in B.C. And Alberta.

Accelerated area loss was highest for small glaciers on Vancouver Island, where they experienced a 32-fold increase in the rate of shrinkage.

"Glaciers are shrinking very quickly," UNBC PhD candidate Alex Bevington, the paper’s lead author, said. "Without satellite imagery it would be nearly impossible to monitor how glaciers of western Canada change year-to-year. Our data provides an updated inventory of glacier change which is needed by water managers and the scientific community."

Glaciers represent a critical source of stored freshwater in western Canada. Human-induced climate change continues to threaten their existence. In addition to glacier retreat, researchers were able to show the area of proglacial lakes grew five times faster over the last decade.

"Accelerated glacier retreat exposes unstable slopes that can suddenly fail," Dr. Brian Menounos, the Canadian Research Chair in Glacier Change, said. "An increase in lakes adjacent to unstable slopes elevates the likelihood for flood hazards downstream of these lakes if they were to suddenly fail."

Results of the study were published in Remote Sensing of Environment, which is an international journal that focuses on earth observations from aircraft and satellites.