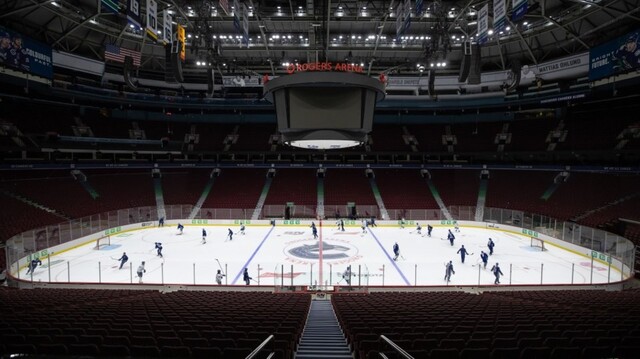 The Vancouver Canucks are getting an early Christmas break.

After the Canucks' two weekend games against the Toronto Maple Leafs and Arizona Coyotes were postponed due to COVID-19 outbreaks on all three teams, their remaining games before Christmas were left up in the air. The team was scheduled to travel to California to face the San Jose Sharks on Tuesday, then host the Anaheim Ducks at Rogers Arena on Thursday.

Both of those games have now been postponed.

The NHL sent a release on Sunday that postponed all games involving a team crossing the U.S.-Canada border through December 23. That includes both Canucks games this coming week.

"Due to the concern about cross-border travel and, given the fluid nature of federal travel restrictions, effective on Monday, all games involving a Canadian-based team playing a U.S.-based team from Monday, Dec. 20 through the start of the holiday break on Dec. 23, will be postponed and rescheduled," said the NHL in their statement.

The game in San Jose was a particular concern to the Canucks. If a player tested positive while in the U.S., they might have been required to quarantine there, meaning they would potentially miss Christmas with their families in Vancouver.

"The players really weren’t comfortable with going and getting stuck there,” he added. “I’m sure that’ll be part of the decision for this game going to San Jose, especially at this time of the year."

The NHL also declared their intention to continue the 2020-21 NHL season despite over 100 players and coaches entering the NHL's COVID protocol over the last week.

"Although there has been a recent increase in positive COVID test results among Players, coaches and hockey staff, there have been a low number of positive cases that have resulted in concerning symptoms or serious illness," said the NHL in their statement. "Therefore, the NHLPA’s and NHL’s medical experts have determined that, with virtually all Players and Club hockey staff fully vaccinated, the need to temporarily shut down individual teams should continue to be made on a case-by-case basis."

Still up in the air is the NHL's participation in the Olympics. The NHL scheduled a break in the schedule for the Olympic Games in Beijing in February but the postponed games and concerns over both COVID-19 and quarantine requirements in China have seen both the NHL and NHLPA reconsider their decision to participate.

"I’m still a guy that’s wanting to go play in the Olympics,” said Edmonton Oilers captain Connor McDavid last week. “But we also want to make sure it’s safe for everybody. For all the athletes, not just for hockey players.”