Photo: Contributed
Luna cuddles up in a Grouse employee's sweater to keep warm after her rescue. Grouse Mountain Resort

A beloved dog that was missing for two weeks in the North Shore mountains has been reunited with her overjoyed owners – thanks to a observant ski operations team at Grouse Mountain Resort, a ride on a snow cat and a little help from a reindeer leash.

Luna, a three-year-old Jindo rescue dog from Korea, had only joined her North Vancouver family of Bianca Camacho and Kyle Silva in July.

As a rescue dog, Luna was somewhat timid and was still learning to socialize and trust her new family when she took off on a walk and went missing on Nov. 29.

Camacho said she had Luna out on her usual evening walk that night near Sixth and St. Georges when she accidentally dropped Luna’s leash. “That spooked her,” said Camacho. “She took off running down the street.”

Camacho last saw Luna taking off into the trails near Sutherland Secondary at 11 p.m. that night. “That was 15 days ago.”

Camacho and her partner immediately began searching for Luna, combing local trails and connecting with local dog walkers, mountain bikers and launching a campaign on social media to help lead to any sightings.

Their search campaign garnered incredible community support and reports of a couple of sightings in Lynn Valley, said Camacho, but did not lead to finding Luna.

The couple were so busy searching that they hadn’t got a Christmas tree or done any holiday preparations.

Then on Tuesday, a bit of a Christmas miracle unfolded on Grouse Mountain.

A team from the resort was working near the Olympic Express Chairlift around 8 a.m. when “they saw paw prints in the snow,” said Melissa Taylor, spokesperson for the resort.

The workers followed the trail of paw prints to where they seemed to lead – underneath the load platform for the chairlift. When Grouse operations manager Kevin Smith saw Luna there, he realized she matched the photos of the lost dog that had been circulating on social media.

One of the workers, Gordon McNaughton, was able to crawl under the platform to reach the frightened dog, luring her out with a samosa. He took off his sweater to keep the dog warm. Luna then got a ride on a snow cat down to one of Grouse’s cabins before she was transferred to a travel kennel for the gondola ride down the mountain.

Employees also fashioned a leash for the pooch, from a lead usually used to help guide reindeer at the resort’s Peak of Christmas experience.

Camacho said she was at work at a dentist’s office Tuesday morning when she got the message from Grouse, with a photo of Luna attached.

“I started shaking and crying,” she said. “I was so happy.”

Camacho said her boss drove her to the base of the mountain, where she met with Silva and awaited Luna’s arrival via Skyride.

When they saw her for the first time, “We cried our eyes out,” she said. “It was truly a Christmas miracle.”

So far it's a mystery how Luna made it all the way from lower Lonsdale to the snowy top of Grouse Mountain.

Luna will be heading to the vet for a checkup on Wednesday. And while she’s starting off on small amounts of pet food, no one will be surprised if Santa soon brings some dog treats around.

“She is what we wished for for Christmas,” said Camacho. “Now we finally have her back she’s definitely going to get spoiled.” 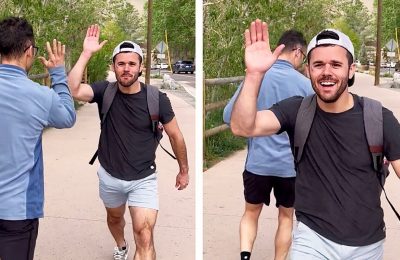