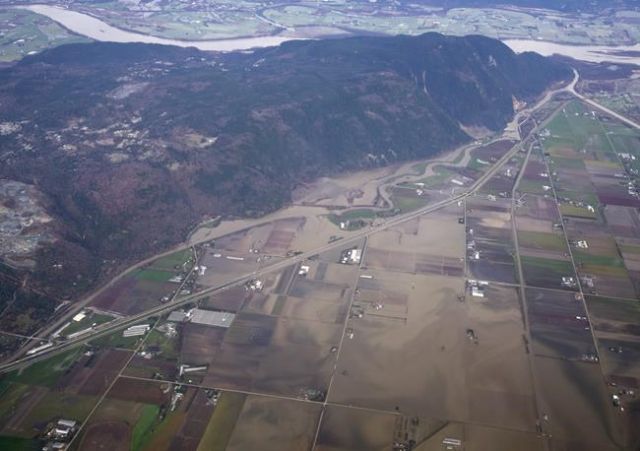 Photo: The Canadian Press
Flood waters are seen from a plane covering the fields and surrounding area of Abbotsford, B.C., Friday, Dec. 3, 2021. THE CANADIAN PRESS/Jonathan Hayward

The Trans Mountain pipeline has restarted following a three-week precautionary shutdown during a series of storms that battered southern British Columbia, causing extensive flooding and landslides.

Trans Mountain Corp. says in a statement the pipeline was safely restarted Sunday after all necessary assessments and repairs were completed.

It says some of that work included the construction of "protective earthworks" after flooding exposed sections of the 1,150-km pipeline that carries 300,000 barrels per day of petroleum products from Alberta to B.C.

Trans Mountain, a federal Crown corporation, says it's monitoring the pipeline on the ground, by air and through its control centre after the restart.

It says additional work in the coming weeks will include the "armouring of riverbanks" and adding ground cover or relocating sections of the pipeline.

The B.C. government had asked residents to limit their fuel purchases to 30 litres per visit to a gas station until Dec. 14 in response to the shutdown, and there's no immediate word on when the rationing order will be lifted.

Trans Mountain is the only pipeline in North America that carries both oil and refined products, and the shutdown was the longest in its history.