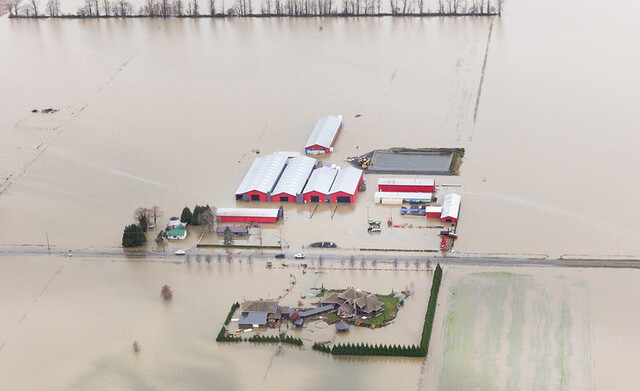 While thousands of animals were killed in the flooding of Abbotsford's Sumas Prairie over the past several weeks, many have survived thanks to massive efforts by farmers and other volunteers.

“This is really due to farmers working together and communities making sure that they had those farmers' backs,” Popham said.

While 98 per cent of B.C.'s turkeys survived the floods, Popham noted that issues with transportation have caused price increases heading into the holiday season.

"It's an unfortunate complication when we see a disruption like this but hopefully we'll see in the new year, as things get more streamlined, that those costs will adjust," Popham said.

She spoke of one cattle farmer who spent 48 hours feeding his cows hay while they stood neck-deep in flood waters.

“As soon as the waters were able to recede enough, the Abbotsford Rugby Association came in and helped him clean up those barns,” Popham said. “They cleaned hundreds of stalls and then even assisted the family removing stuff from their soggy basement.

“And after they did that, they moved on to help other farmers. I've also heard that a hockey team did the same thing. That's an incredible reflection of how a community can get behind the efforts under way to help people get back up on their feet.”

Some impacted farmers are already well on their way to recovering.

“One poultry farm [on the Sumas Prairie] has finished clearing and sanitizing two of their poultry farms, fresh shavings have been laid and they're expecting new chicks to be laid on Monday,” Popham said.

She met with federal Minister of Agriculture Marie-Claude Bibeau Thursday night, during a meeting with impacted farmers.

“Minister Bibeau mentioned that she was expecting to hear a lot of sadness and despair, but what she heard was strength and commitment across the board – farmers and associations made sure that she knew they were resilient,” Popham said.

“I wasn't surprised to hear that. Those are the farmers that I know and have grown to love over the years, and I couldn't have been more proud of them at that table last night.”