Snow forecast to fall, may help with flood recovery 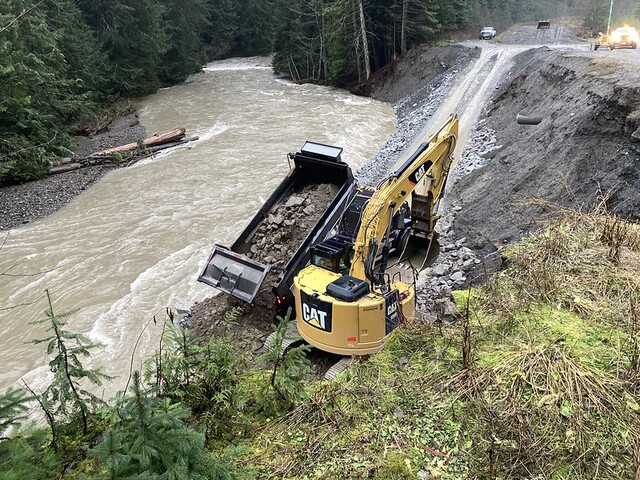 Photo: BC Gov Flickr
BC Hwy 3 near Skagit 2 Bridge

The worst of B.C.'s coastal weather is behind us this week, and while snow may fall at low elevations through the weekend, the colder weather may actually assist in flood recovery.

During Friday's press conference, Minister of Transportation Rob Fleming said more seasonal cold weather is expected in the coming weeks, and there are no longer any flood watches or warnings in effect in the province. The shift in weather comes after the coast has been hit with three weeks of severe rains, causing widespread flooding and landslides across the southwest of the province.

“With the extreme weather now past us, we continue to see more stability on our highways network,” Fleming said, adding that Thursday's reopening of Highway 1 from Abbotsford to Hope has been successful.

Meanwhile, Highway 99 north of Pemberton will remain closed through Friday after a landslide closed the road Wednesday night. A slide also recently closed Highway 12 between Lytton and Lillooet, but that highway is expected to reopen later Friday.

Highway 3 east of Hope remains open to essential travel only, and flooding that had previously closed the road east of Princeton has subsided.

With wet snow expected to fall across the Lower Mainland and the Interior through the weekend, this could actually help recovery and rebuilding efforts in some areas.

“The sustained freezing temperatures in the Interior of B.C. will help to reduce the water levels on the Fraser, which will help water to be drained more quickly from the Sumas area.”

Environment Canada's Armel Castellen says two separate snow events are expected to hit the south of the province, with the first coming Friday night and the second Monday morning. Up to 15 cm of snow is forecast to fall on the Coquihalla and Allison Pass areas through to Saturday morning.

Fleming once again said he has no estimate yet of what rebuilding the Coquihalla, Fraser Canyon and Highway 8 might cost, but said “it's fair to say that it will be very significantly expensive.”

“We're in the planning stage on what that might look like, as well as in terms of temporary access,” Fleming said. “We'll have more updates and a better idea of costs as we do more of the engineering assessments of what the full recovery look likes.”

The B.C. government's request for qualifications in the BC Highway Reinstatement program says some projects will be between $20-$50 million, while others will be in excess of $50 million.

Fleming said he's been in talks with the federal government about accessing disaster financial assistance to rebuild the highways to be more resilient to severe weather, due to “the age of extreme weather events that we're now in.”

Minister of Transportation Rob Fleming and Minister of Agriculture Lana Popham are holding a press conference to update residents about flooding and mudslides across B.C.