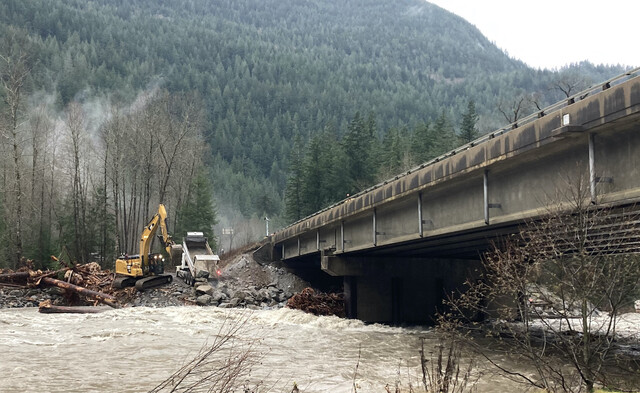 With the worst of this week's storm behind us, the B.C. government is looking at rebuilding provincial highways better than they were, in anticipation of more frequent severe weather in the coming decades.

During Thursday's press conference, Minister of Transportation Rob Fleming confirmed Highway 1 between Abbotsford and Hope is reopening Thursday afternoon, after Tiger dams were placed across it Sunday night in the Sumas Prairie area.

“The Tiger dam across Highway 1 that had been a temporary addition to the diking system was taken down,” Fleming said.

“It had been a highly successful undertaking and it reflects the exceptional teamwork between Emergency Management BC and the City of Abbotsford.”

Minister of Public Safety Mike Farnworth said this week's atmospheric river was not as severe as forecast.

“We are now on the other end of this series of intense storms, and these latest events were thankfully not as severe as forecast,” Farnworth said. “The worst weather now appears to be behind us and I think we're all grateful for that.”

Highway 99 remains closed after a large landslide hit the Duffy Lake area of the highway Wednesday evening. The road had been pre-emptively closed prior to the large slide, so no one was driving on it when the 2,000-cubic-metre slide hit.

“We're doing additional upslope inspections as well, just given that this is an area without a history of slides, nor did it have recent wildfire activity," Fleming said. "We're trying to get a better understanding of the slide activity that we saw last night and of course the initial tragic slide that occurred."

The highway is expected to remain closed until at least Friday.

Highway 3 remains open west of Hope to essential traffic only, although it remains closed due to flooding east of Princeton.

Minister Fleming was unable to provide an estimate of the cost of rebuilding B.C.'s heavily damaged transportation network, but said it will be a “big job” that will cost “a lot.”

“We're making those points with our federal counterparts – that we're not simply rebuilding what we had, we need to have superior drainage systems, account for climate change forecasting over the next many decades. The engineers that are doing those assessments and gathering geotechnical information right now are advising us what that looks like.

“We want to rebuild as quickly as we can, but we want to rebuild it right to new higher standards that are attuned to the realities of needing to adapt to climate change, because extreme weather events like this are predicted to happen more frequently.”

“This has been a very active [wet] streak since mid-September on the heels of an extremely dry and hot summer. So we have gone from some extremes to other extremes, and unfortunately this is consistent with what climate change has been projecting for all parts of Canada,” Castellan said.

“The frequency, the amplitude of these events, and their longevity individually will continue to increase with the coming years and decades.”

Last week, Minister Fleming said he hopes the Coquihalla will have enough temporary repairs in place to be reopened to commercial traffic by the end of January.

“Even with these rain events that we've just been through, we've had a significant amount of activity going on there – heavy equipment breaking up rock and making repairs, taking down abutments that are damaged,” Fleming said Thursday.

“Work has never stopped even during these weather events, and we've had in some cases night work occurring as well.”

Fleming had no timeline on when Highway 8 between Merritt and Spences Bridge – one of the hardest hit roads in B.C. – may be repaired. He noted that some communities in the area that have been completely cut off are still receiving goods by helicopter.

The B.C. government is holding a press conference to update residents about widespread flooding and mudslides across B.C.

The press conference will include Minister of Public Safety and Solicitor General Mike Farnworth, Minister of Transportation and Infrastructure Rob Fleming and Minister of Agriculture Lana Popham.