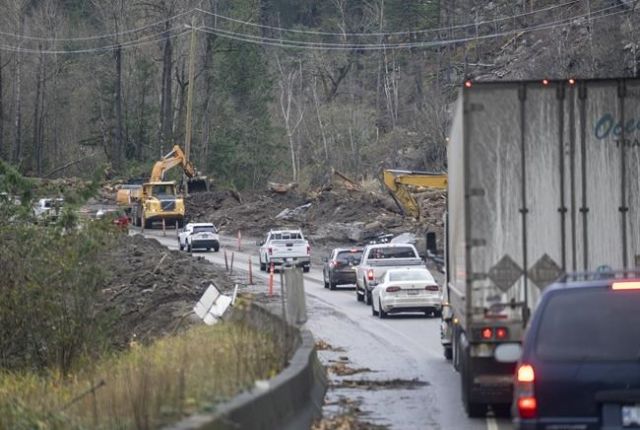 A landslide closed traffic today on the same highway near Agassiz where motorists were trapped between slides caused by major rainstorms last month.

DriveBC says the road has been reopened to single-lane, alternating traffic on Highway 7 near Maria Sough Bridge and crews were assessing the damage.

The incident occurred as southern and coastal British Columbia entered the tail end of severe weather that meteorologists have described as a "parade" of storms.

Evacuation orders have been issued by the Squamish-Lillooet Regional District for properties near the community of Birken due to a landslide hazard at Neff Creek.

Public Safety Minister Mike Farnworth says the province is doing everything it can to make sure people and communities have the resources and support they need.

He says Emergency Management B.C. along with troops, local government staff and community volunteers were making sure shelter, food, medication, emergency kits, fuel and other resources were available.

Environment Canada says the central coast and the west coast of Vancouver Island could see up to 150 millimetres of rain, with up to 120 mm in the Bella Coola area, while the flood-soaked Fraser Valley east of Abbotsford could get up to 100 mm. Strong winds gusting to 90 km/h were also forecast.

A travel advisory has been issued and maintenance crews have been dispatched to stretches of Highway 20 between Bella Coola and Williams Lake in response to heavy rainfall in the forecast for the central coast. Travel advisories are also in place for sections of Highways 1, 3 and 7.

The British Columbia River Forecast Centre has issued flood watches for the central and south coasts, Lower Fraser and all of Vancouver Island.

Environment Canada says the rain should ease on Thursday and Friday, but a smaller storm system is expected to affect the south coast late on Friday.