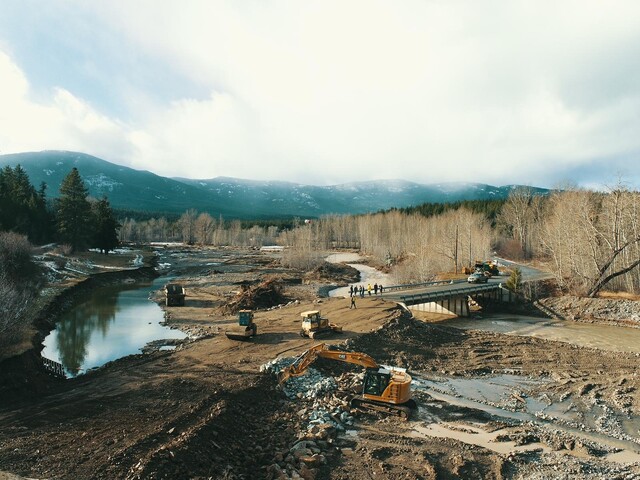 British Columbians are being urged to continue to stay off flood-impacted highways and to prepare for the next deluge of rainfall.

“In southwest B.C., Environment Canada is warning of extreme rainfall that may worsen existing flooding or create new flooding. This storm may not have the same level of intensity as we saw mid-month in some of our hardest-hit areas, such as the Fraser Valley, but the cumulative effect of this succession of storms will be, and continues to be, a major challenge,” warned Mike Farnworth, Minister of Public Safety and Solicitor General.

The B.C. River Forecast Centre is keeping a close eye on river levels not just in southwest B.C., but also in the Central Coast, as the third of three atmospheric rivers moves into the province later today.

More than 100 millimetres of rain is also forecast to fall on already saturated areas, including parts of the southern Interior.

“Overnight we have already seen upwards of 60 millimetres in Hope. The Central Coast has also seen the early start of this atmospheric river, and it will continue overnight, into tomorrow evening,” said Armel Castellan, a warning preparedness meteorologist with Environment Canada.

He’s forecasting upwards of 100 mm in Howe Sound, on the North Shore, 150 even possible on the outside of Vancouver Island and the Central Coast, and deeper inland as well. Bella Coola could get 120 mm.

“We will see some spillover from this event as well into the coastal mountains. So, the Coquihalla summit and over towards, not quite reaching, but getting towards Princeton and Merritt.”

Heavy snowfall is forecast in the Peace Region and the Columbia Mountains. Another concern is the rising freezing level. It could climb to 3,000 metres in some areas, causing snowmelt on top of the rainfall.

“We’re certainly expecting to see, with abundant snow that’s available, particularly at low and mid-elevations through the Central Coast, as well as mid and upper-elevations on the south coast, we do anticipate additional runoff from that. For example, last weekend we did experience upwards of 30 to 60 millimetres of snow water equivalent melt,” explained David Campbell, head of the B.C. River Forecast Centre.

He says moderate to severe flooding is possible in the Central Coast, over the next 48 hours, and in areas of Vancouver Island and the Howe Sound region.

“Rainfall is expected to have that spill over into the Interior drainages. Looking at those risks from ongoing vulnerabilities in the Merritt, Princeton, Lower Nicola as well as Spius Creek,” Campbell said.

The additional rain will likely push river levels back up in the Fraser Valley, especially on the Sumas and Nooksack River.

“At the moment, we've dropped down about four feet or so from conditions that were experienced over the weekend. So we’ve got a little bit of room, but are expecting, with this rainfall, to push that back up as we go into tomorrow. There is risk late tomorrow of seeing another overtopping event in the Nooksack River.” Campbell notes the National Weather Service in the U.S. has issued another flood watch for Whatcom County.

Highway 3 and parts of Highway 7 remain open to essential travel only, but there are still closures blocking Highway 1 and the Coquihalla Highway.

The province is holding another update on its response to the flood situation in B.C.

Public Safety Minister Mike Farnworth and Transportation and Infrastructure Minister Rob Fleming, along with other officials, will be sharing the latest information during a news conference at 11:30 a.m. Tuesday.

Another atmospheric river weather event is moving into the province and could bring even more heavy rain and flooding to already over-saturated areas of the southwest B.C.