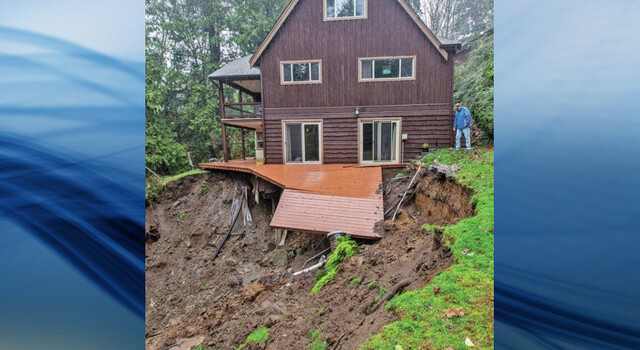 Jeff Morrow’s home teeters on the edge of Millstream Creek in Langford, his backyard swallowed by a 30-foot sinkhole and his deck left hanging.

“It looks like a meteor hit the backyard,” said Morrow. “I just heard a terrific crunch and whoosh. We took a flashlight outside and saw two trees went over and half of the backyard was just gone.”

On the other side of the creek, Julian ­Szostakiwskyj’s property was a lake, his home of 40 years under a foot of water.

As homeowners continue to assess and clean up after the Nov. 15 deluge, the creek was rising again Thursday, as the first of three more atmospheric rivers of rain started filling it.

Szostakiwskyj was out with a chainsaw cutting away the crown of a maple tree that toppled off ­Morrow’s backyard and was collecting debris.

Szostakiwskyj, who is still in the process of ­mopping up after the last flood, salvaging what he can from his basement, was watching the creek ­carefully. “It’s a worry,” he said.

He and his wife, Cheryl, have applied for disaster relief from the province to shore up his caved-in backyard. Their home of more than 30 years has been surveyed by engineers and is considered safe, although the couple say that could change, depending on what impact continued rain has on creek levels and the condition of the bank.

Ian Bruce, executive director of the Peninsula Streams Society, which works to restore salmon habitat, was waist-deep in Millstream Creek on Thursday helping to keep it clear. Bruce has been trying to assess fallen trees and other debris piling up all along the Millstream watershed — extending from its source in the Highlands and flowing through Langford, Colwood and View Royal, where it spills into Esquimalt Harbour.

“In my 61 years in Langford, I’ve never seen the rainfall we’ve experienced this month,” said ?Langford Mayor Stew Young. “It shows our climate is changing and we have to be prepared.”