Good progress being made on Abbotsford flood mitigation efforts 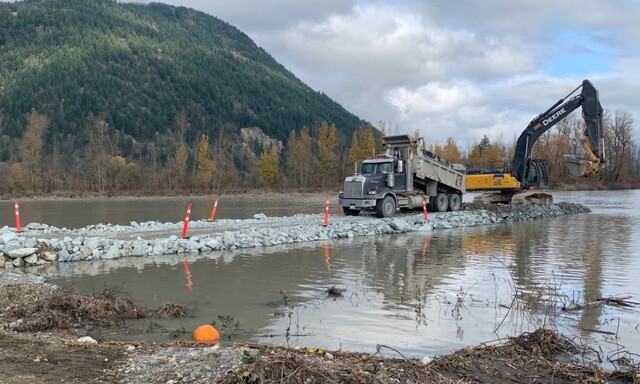 Abbotsford mayor Henry Braun became a little choked up Saturday afternoon, as he was finally able to deliver some good news to residents.

The city has been devastated by flooding all week, following the “atmospheric river” that dumped hundreds of millimetres of rain across the Fraser Valley.

During Saturday's press conference, Braun said the Fraser River has dropped low enough to allow the city's floodgates at the Barrowtown pump station to partially open, helping release some of the flood waters in Sumas Prairie.

“This has lessened the flow of water breaching the Sumas dike that has been flooding in the eastern part of Sumas Prairie. It is our hope at this point that water levels will continue to decrease in the Sumas River so that the floodgates can remain open, and potentially open fully,” Braun said.

He also said crews have dumped hundreds of dump truck loads of material to patch a 100-metre breach in the Sumas dike between Marion and No. 4 roads, and the large breach is more than 50 per cent fixed.

Friday, Braun highlighted the importance of fixing the large breach before more rain is expected to fall next week, and he said Saturday they're on track to meet that goal.

“This is very good news actually," he said. "The lake has shifted to the east, so as that happens there are farms that are starting to dry out on the western side of that lake. But there are still farms on the eastern corner ... [where water is] still rising.”

Braun also cautioned that as levels fluctuate in the Fraser River, the floodgates may have to be closed again.

“We may have to close those gates again ... because the tides come into play here, and when the river rises we've got to close the gates because the Fraser River will come right back into Sumas Prairie,” he said.

The pumps at the Barrowtown pump station can pump out 500,000 gallons of water per minute from the Sumas Prairie, but fully opening the floodgates allows for seven times that amount of water to enter the Fraser.

More military personnel continue to arrive in Abbotsford, and there are now 119 soldiers on the ground assisting with flood mitigation and helping evacuees.

While Braun was optimistic about their progress Saturday, he noted the forecast rains next week could bring more problems.

“Things can change, I've been surprised a few times,” he said.