Racing to fix breach in dike 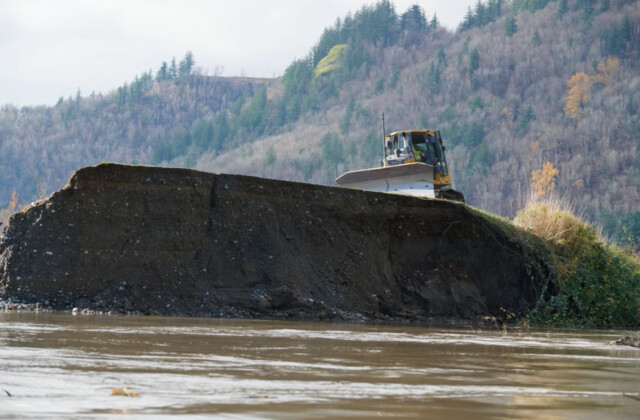 Photo: City of Abbotsford
Crews work to fix a 100-metre breach in the dike system.

The City of Abbotsford has changed course and will no longer be building a new levee that would have seen 22 homes further impacted by flood waters.

Abbotsford Mayor Henry Braun announced Friday afternoon that with changing conditions, their plans have changed, and they're now working to fix a 100-metre break in the existing dike instead.

“The levee option is no longer being considered, and will not be built,” Braun said.

“The water has equalized on both sides, so we don't have water pouring into the bowl, so when we learned this new information, we had some options that we didn't have before.”

Had the city gone ahead with new levee construction, 22 properties would have ended up on the wrong side of the levee.

“They're already impacted by the water, and they would have been impacted for a longer period of time had we gone ahead with the levee construction,” Braun said.

Now, crews are working non-stop to patch a 100-metre hole in the existing dike, before significant rainfall is expected to return to the city Tuesday.

“I have instructed our city manager that I want to see that dike closed before the next rain event, which is scheduled to arrive I think Tuesday morning or Monday night,” Braun said, adding he is confident the breach will be closed in time.

“The consulting engineers that are working with us, our own engineers, and the contractors have been poring over this plan.”

As of Friday, 64 Armed Forces soldiers are on the ground in Abbotsford, with some walking the dike looking for more weaknesses. Braun said some have been found already.

"That dike has been weakened. To what degree, we don't know that," Braun said.

“The minute that happens, we're opening them up, which will really contribute to letting a lot of that water out, seven times more than the pump system that we have there,” Braun said.

There remains 640 people evacuated from the Sumas Prairie area, and 60 of the evacuees are expected to stay at the Tradex Centre overnight.