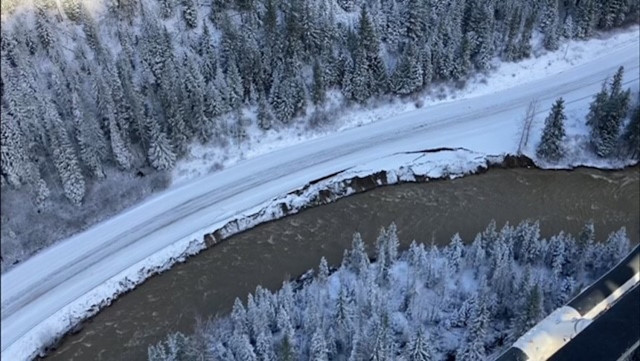 DriveBC is reporting that Highway 3 has reopened between Princeton and Keremeos.

The highway remains closed between Princeton and Hope.

Highway 3 has now been cleared between Taylor Mill Road and Old Hedley Road, which will allow trucks to access Princeton.

At this time, trucks and travellers will continue to have to transit through the U.S. border crossing to enter the Interior from the coast.

Highway 3 has been identified as the priority by the Ministry of Transportation to be the first main artery opening back up to the Lower Mainland, but that is not likely to happen until after the weekend.

While the provincial government says Highway 3 is likely the best hope to restore a major road link between the Lower Mainland and B.C. Interior, a massive job awaits crews.

Photos published Wednesday by the Ministry of Transportation show multiple slides and debris fields on the Hope-Princeton Highway.

The highway, however, has fared much better than the Coquihalla Highway and Trans-Canada, which sustained catastrophic complete washouts. While Highway 3 is damaged and undermined by water in areas, it appears in one piece.

Minister of Transportation Rob Fleming said Tuesday the government should be able to provide an update on timelines for reopening of Highway 3 in the coming days “and whether it can be reopened by the end of the weekend.”

At this point, trucks and travellers are having to transit through the U.S. and Osoyoos border crossing to enter the Interior from the coast.