As of this morning, closures continue on the Coquihalla, Fraser Canyon and Hope-Princeton highways to the coast as well as on the Trans-Canada Highway to Alberta, between Revelstoke and Golden.

Highway 5 is closed by a mudslide south of the Great Bear Snowshed with no estimated time of reopening available.

A travel advisory is in effect between Golden and Revelstoke, with a closure west of Revelstoke due to rockfall. Travel is not recommended unless absolutely necessary, DriveBC advises.

On Highway 3, there is flooding at Princeton, and the highway is closed. An assessment is in progress.

Highway 5A at Princeton is also closed due to flooding.

In southeastern B.C., Highway 93 is under a travel advisory at Kootenay National Park, with forecasts calling for heavy snow through Monday, turning to rain. Snowfall of up to 50 centimetres is expected.

Highway 3 between Fernie and Elko is also under a travel advisory with extreme heavy rains and localized flooding. Travel is not recommended unless absolutely necessary. Flooding is reported east of Fernie, where the route is closed. 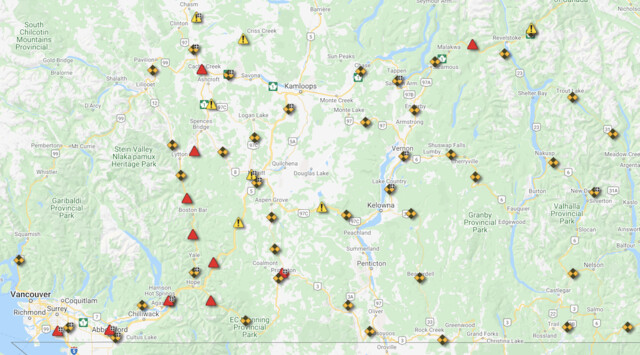 Another route linking B.C.’s Interior with the Fraser Valley has been cut off late Sunday, DriveBC has now confirmed.

Highway 3 is closed in both directions at Sunshine Valley, cutting off the route between Hope and Princeton.

In a tweet just after 11 p.m., DriveBC said an assessment is in progress.

Canada Task Force 1, a heavy urban search and rescue team, has been dispatched to the slide on Highway north of Agassiz.

The Vancouver-based team specializes in rescuing victims from rubble and was used in Kelowna in the wake of the downtown crane collapse.

Vancouver Fire Chief Karen Fry said on Twitter the team is dealing with the potential of trapped vehicles or victims.

A message to Castanet News from a driver stuck at the slide site at Highway 7 and Seabird Island Road says "several hundred" vehicles are stranded. Cars have been pushed over an embankment by the slide.

The Ministry of Transportation is moving vehicles to higher ground as a precaution, the driver said. There is still no word on injuries.

DriveBC is also reporting Highway 1 is closed in the Fraser Canyon, between Hope and Spences Bridge, due to flooding.

Our @CANTF1 is being deployed to assist with #agassiz #Kent and the landslides with potential trapped vehicles/victims.

A landslide has hit the Lougheed Highway, north of Agassiz, cutting off the last practical route between the Lower Mainland and B.C. Southern Interior.

DriveBC reports a mudslide has forced the closure of Highway 7 at Mount Woodside. Emergency radio scanner traffic suggests some vehicles may have been hit by the slide and search and rescue crews are on scene.

Torrential rainfall on Sunday brought down slides earlier in the day on the Coquihalla Highway and on the Trans-Canada south of Hope, forcing both to close.

With the closure of Highway 7, the only way to reach the Lower Mainland is now Highway 99 and the Sea-to-Sky Highway through Whistler — a seven hour detour.

There are also social media reports of a “large debris field” across Highway 3 north of the Hope Slide.

Complicating things further, a massive power outage in the area has knocked out electricity to Hope and the Lower Fraser Canyon, meaning most gas pumps are out of service in those communities.

There is no indication when any of the highways will reopen.

Heavy rain is in the forecast from Sunday November 14th to Tuesday Nov 16th.

DriveBC says a closure may result due to the risk of sudden debris flows in fire affected areas.

Motorists are advised to exercise caution when travelling and consider alternate routes.

According to DriveBC Highway 1 is closed in both directions between Sicamous and Revelstoke due to rocks on the road.

Crews have been notified and are on scene.

An assessment in progress.

DriveBC reminds motorists to watch for traffic control, and drive with caution.

DriveBC has also issued a reminder that Highway 1 is closed between Hope and 2 km's east of Chilliwack due to a mudslide.

Traffic is backed up in and around Princeton because Highway 3, the Hope-Princeton Highway, is the only main route currently open between the Southern Interior and the Lower Mainland.

Several posts on social media say the Princeton Fire Department has been out directing traffic through the community. One woman posted that the mayor, Spencer Coyne, was also helping with traffic control.

Earlier this year, the community saw heavy traffic for several days along Hwy 3 because of wildfire-related closures on Hwy 1 and Hwy 5.

Expect delays if you are in the Princeton area.

The Coquihalla Highway between Merritt and Hope won’t be re-opening until tomorrow, at the earliest.

DriveBC says the next update is scheduled at Noon Monday, Nov. 15.

?? UPDATE - #BCHwy5 CLOSED in both directions between #HopeBC and #Merritt due to a mudslide. Next update MONDAY Nov 15 at noon. Detour via Highway 3. Details: https://t.co/gadUSa8STR ??

The Coquihalla and Fraser Canyon highways remain closed due to landslides Sunday afternoon, and now another slide and more flooding has closed the eastbound lanes of Highway 1 between Chilliwack and Hope.

DriveBC says a mudslide has closed eastbound traffic on Highway 1 between Herrling island and the junction with Highway 9. Earlier Sunday, photos from the Popkum Road area showed water spilling across the highway from the ditch.

DriveBC says the closure can be avoided by using Bridal Falls Road and Highway 9. DriveBC did not provide an estimated time of reopening, but warned of "major delays."

Up to 100 mm of rain is expected to fall across the Lower Mainland through to Monday afternoon, and it's already wreaking havoc on local highways. Video from the Coquihalla show a massive mudslide blocking traffic near the Great Bear Snowshed, while falling rocks have forced the closure of Highway 1 through the Fraser Canyon.

EASTBOUND CLOSED #BCHwy1 - Due to a mudslide between #HerrlingIsland and #BCHwy9. Crews are on scene, assessment in progress. Estimated time of reopening not available. Detour via #BCHwy9 and Bridal Falls Rd. #Chilliwack #HopeBC #Agassiz pic.twitter.com/xVtP8jzjAK

A new mudslide has closed the Coquihalla Highway in both directions Sunday.

Jill Yates called Castanet to report the highway is closed, just after the Great Bear Snowshed. She recorded a video that shows muddy water pouring over the southbound lanes of the highway, with rocky debris covering the road.

DriveBC says the highway is closed between Exit 202 and Exit 217: Zopkios Brake Check, due to the mudslide. An update from DriveBC is expected by 1:30 p.m.

Highway 1 through the Fraser Canyon is also closed Sunday due to a landslide. Heavy rains are expected across the Lower Mainland and on the high-elevation highways through to Monday afternoon. 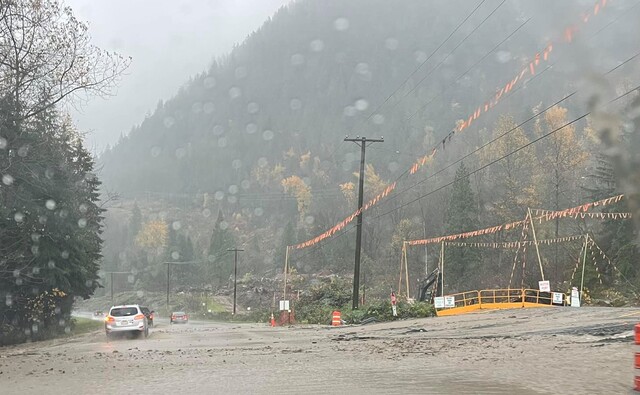 While a rock slide has closed Highway 1 through the Fraser Canyon Sunday morning, water is now pooling across the highway between Hope and Chilliwack.

Photos from the highway just east of Popkum Road show a large amount of water pouring across the eastbound lanes of the highway from the ditch. The flooding is near a construction site for the Kinder Morgan pipeline expansion.

Heavy rain is expected to continue to fall in the area, and across the Lower Mainland, through to Monday afternoon.

The Trans-Canada Highway has been closed Sunday morning south of Spuzzum after rocks came down across the road.

The Fraser Canyon highway was closed just after 10 a.m. due to the rock slide, between Toll Road and Skalula Crescent.

Heavy rain has been hitting the area, and up to 80 mm is expected to fall through to Monday.

Heavy rain is forecast to fall across Metro Vancouver and on the Coquihalla Highway as well.

DriveBC does not have an estimated time of reopening for the highway, but a new update is expected at 12:15 p.m. 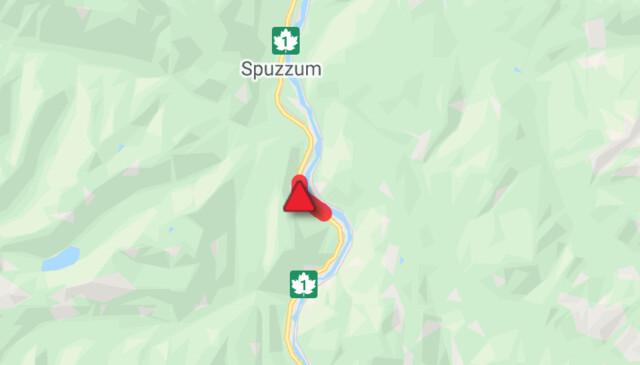