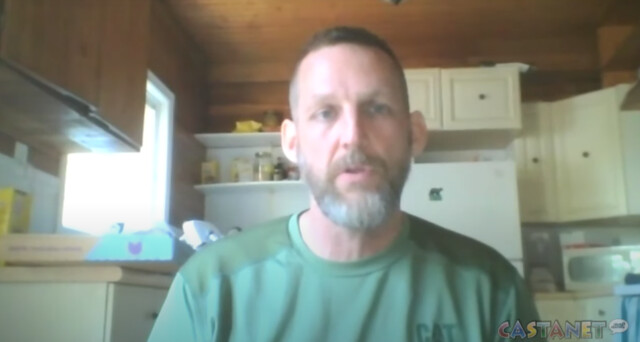 Photo: Castanet Staff
Sean Taylor, a registered nurse and anti-vaccine advocate who has joined Ezra Wellness. The BC College of Nurses has issued a warning to registrants spreading misinformation.

The regulatory body that oversees nurses and midwives in B.C. has fired a warning shot towards nurses who are spreading misinformation about the pandemic.

In a statement this week, the B.C. College of Nurses and Midwives said it is working with its partners and the provincial government to address the “numerous” recent reports of members “who participate, organize, or agitate against public health orders in place to deal with COVID-19.”

The college issued the statement on the same day that Ezra Wellness was ordered out of its Kamloops location by its landlord. The clinic, which billed itself as an alternative to traditional healthcare that did not provide healthcare, was opened by Glenn Aalderink.

Aalderink was a Licensed Practical Nurse at Royal Inland Hospital until the healthcare worker vaccine mandate was enforced. He organized an anti-vax rally outside the hospital on Sept. 1 and regular protests in the city against health measures.

Aalderink claimed this week to have 70 trained healthcare workers on his Ezra Kamloops team who were recently placed on unpaid leave due to the mandate.

Sean Taylor, a registered nurse and PPC candidate in the South Okanagan-West Kootenay in the past election, is another driving force behind Ezra Wellness. He was employed at the hospital in Grand Forks but said in a recent YouTube video that he was fired for his comments during the election campaign when he vigorously advocated against the COVID-19 vaccine.

Taylor said unvaccinated healthcare workers have a “moral imperative” to build a new healthcare system. He made the announcement in Toronto, where he travelled to be with anti-vaccine influencer and fellow PPC candidate Mark Friesen, who was intubated in hospital battling COVID-19.

The Ezra Wellness business model is not clear, but Aalderink says he'll be back with another Kamloops location after being evicted this week. A location is operating in Grand Forks, where Taylor is located.

The B.C. College of Nurses and Midwives, meanwhile, says it is watching closely.

The BCCNM is the self-regulating body that oversees the delivery of nursing and midwifery in the province and has the power to conduct investigations and hold hearings.

In its statement this week, the college says it has the legal tools to ensure no individual misuses their registered title or practices without a registration.

That means only BCCNM registrants have the right to use the titles. The college can also legally restrain individuals from using those titles unlawfully or practising nursing illegally.

“BCCNM registrants are free to voice their own opinions in a lawful manner but are not entitled to use a protected title to spread misinformation,” the college’s statement said. “BCCNM can and will take action against registrants whose use of title poses a risk to the public or could bring the profession of nursing or midwifery into disrepute.”