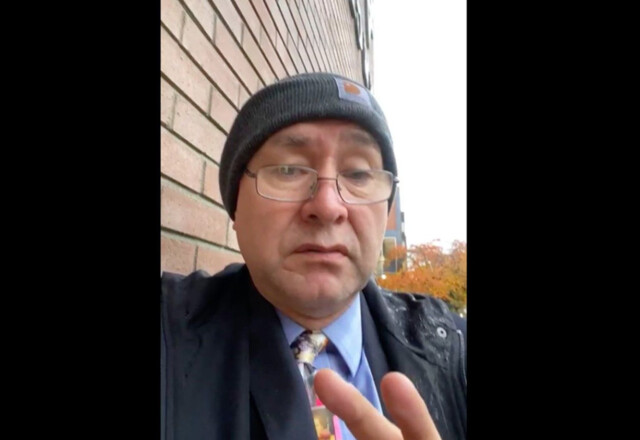 Photo: Ellis Ross/Facebook
In a Facebook(Meta) video uploaded by Skeena BC Liberal MLA Ellis Ross, he warns the NDP Government to not play politics with First Nation issues.

Following two new arrests at the Coastal GasLink (CGL) pipeline site near Houston this week, Skeena BC Liberal MLA and leadership hopeful Ellis Ross came forward in support of pipeline workers and spoke about protecting them.

“The workers are not at fault here. They are just doing the job they were supposed to do under a contract with the company. They should not be exposed to anything, other than just doing a job that was lawful.”

Instead, he directed the blame toward the provincial government for its “arrogant, ignorant and incompetent politics” and warned the NDP to “not play politics with First Nation issues.”

Ross spoke in a Facebook Live update from Victoria where he is in attendance at the B.C. Legislature.

“I’m not sure what’s happening up there [Houston] right now because we have a government that doesn’t actually disclose what’s happening, or they have no idea … And I used to think that the NDP were playing politics with Aboriginal issues. Now, I think it’s a combination of arrogance, ignorance and incompetence,” he said.

On Oct. 27, the RCMP arrested two individuals from the blockade site in Houston where certain clans of the Wet’suwet’en have been protesting against the Coastal GasLink pipeline. The arrests were made for an outstanding criminal code theft and mischief files and for possession of several stolen items from CGL equipment.

The 670-kilometre-long pipeline in northern B.C. by TC Energy is to deliver natural gas from the Dawson Creek area to the LNG Canada facility in Kitimat.

Ross is a former chief councillor of the Haisla Nation on whose traditional land the LNG Canada facility is being built, and played an instrumental role in seeing the project through.

He said the NDP government is “quietly dismantling” all the work that they did with LNG. “They’re quietly dismantling our economy … They want to dismantle it under the guise of United Nations Declaration on the Rights of Indigenous Peoples.”

While the provincial government has no role to play with the RCMP’s arrests, which were a result of the injunctions obtained by CGL from the B.C. Supreme Court, Ross did accuse the NDP government of supporting the protests and “signing anti-LNG declarations,” in his video message.

“They [NDP government] actually opposed the idea of a democratically elected chief and council, who by the way signed on to LNG, every chief and council who are elected by their people signed on to the LNG agreements for Prince George to Kitimaat village including the Gitga’at and Gitxaala First Nations, the NDP disrespected that, they ignored it. In fact, they even went so far to say elected chief and councils were constructed by the Indian Act to annihilate the natives which was an absolutely horrible thing to say about elected leaders,” said Ross.

He further accused the NDP of hiring “buddies at 300 bucks an hour” to go in and talk to chiefs and not producing a proper report out of these consultations. Ross is referring to current MLA for Stikine Nathan Cullen who was tasked by Premier John Horgan in January 2020 to be the intermediary between B.C. and Wet’suwet’en hereditary chiefs.

Pointing at the millions of dollars of taxpayers’ money being spent on the pipeline unrest in northwest B.C., Ross called out citizens to ask for accountability in his message.