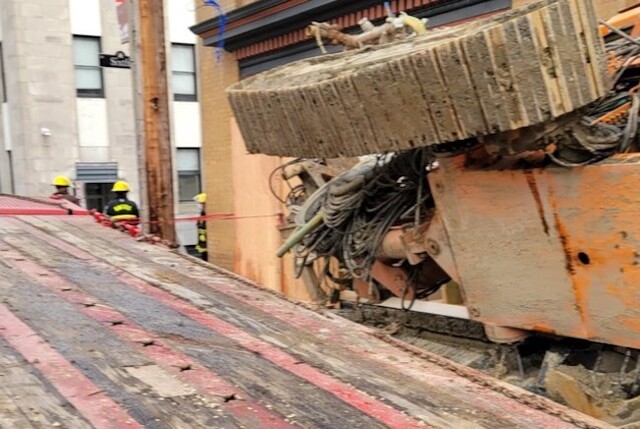 An accident near a New Westminster construction site could have been a lot worse.

Coun. Chuck Puchmayr says a flatbed truck was delivering heavy equipment to a construction site Wednesday when the incident occurred.

“I was told there was a generator on the truck as well ... as soon as they took the generator off, the truck tilted and the machine flipped up against the Cliff Block building, and smashed a window of the Good Omen gift store,” he said.

Puchmayr is a director with the Lookout Housing and Health Society, which operates the Cliff Block Residence.

Puchmyar said a tenant was hit by some debris, but wasn’t seriously injured. He noted that when the emergency weather shelter was located in that building, people would often gather outside because there was nowhere to congregate inside.

“There could have been half a dozen people congregating on that sidewalk right beside where that unit was being dropped off,” he said. “lt definitely could have been a lot more serious than it was.”

Puchmayr said it didn’t appear the building sustained any structural damage in the incident, but the city was sending an engineer down to have a look.

Puchmayr said crews removed the industrial drilling machine from the spot where it landed and put plywood up on the window.