The proponent behind an all-seasons resort project between New Denver and Kaslo has released its formal proposal for public review.

New Denver businessman David Harley, who owns Zincton Farms Ltd., says the formal proposal gives a more complete picture of the project, while addressing issues and concerns raised last year by the public during the project’s ‘expression of interest’ phase.

“If realized, Zincton will establish all-season, backcountry-oriented mountain recreation opportunities catering to dedicated local, regional, and international visitors seeking an immersive, authentic mountain experience,” says the proponent’s report, released by the Province’s Mountain Resorts Branch on October 7. The resort would encompass 5,500 acres (2,225 hectares) of tenured land, with the 30-hectare resort village being built exclusively on private property at the base of the range.

“With unique and intimate accommodation and amenities, the proposed project will seamlessly blend the lift-serviced recreation experience of traditional mountain resorts with extensive and accessible backcountry terrain,” proponents say.

The rationale for the project, the report says, is to help reinvigorate a local economy that has been in the doldrums for decades, as mining and forestry have declined in the area. It would take advantage of the growing popularity of backcountry skiing in an environmentally friendly facility. And it would provide recreational opportunities for locals, who now face a four-hour return trip to the closest local ski hills.

“If approved, Zincton will help address the many social and economic challenges facing the region,” the proposal states. “It will preserve the natural landscape that draws residents and visitors to the area, while accommodating the growing popularity of backcountry skiing, in turn generating much-needed jobs.

“Zincton is not just about recreation, it is about community enhancement and opportunities for locals,” it states.

Much of that was already stated when the proponents first published their expression of interest in May 2020. The initial EOI was reviewed by the public and stakeholders last year, who gave feedback on the idea.

That feedback has been incorporated into this formal proposal, the proponents say.

“These upgrades… listed below, collectively advance Zincton towards achieving the project goals and objectives while, at the same time, meeting and resolving legitimate concerns brought up in the EOI process,” they state.

The initial proposal generated many concerns about the impact of human encroachment into the wildlife habitat along Goat Range. In response, the formal proposal says Zincton will create a 4,000-hectare (10,000-acre) Summer Wildlife Corridor Protection Zone to “reduce and limit future commercial recreation operations” in the area to restore and strengthen the habitat. The report notes that Zincton only encroaches on 5% of the wildlife corridor, and says they hope to work with other local tenure owners to coordinate protection efforts in the rest.

In connection with that protection zone, summer operations at Zincton will be limited to alpine hiking and guided sightseeing. Existing bike trails in high-elevation wildlife corridors will be phased out in favour of connecting to or creating new low-altitude trails over the coming years to reduce impacts further. Berry picking in the area will also be discouraged, the proposal says.

The proponents have emphasized that a good deal of the tenure they’re seeking is unremediated mining areas with serious environmental issues like toxic slag waste and contaminated soil and water. To address that, the proponents say they’ll create a Zincton Institute to oversee reclamation operations, which will be funded by 1% of the resort’s revenues set aside in an ‘environmental action fund.’ That 60-year, $13 million project will leave the area better than they found it, they say. The institute, besides formalizing environmental research and coordinating land restoration in the area, will also work to foster “mountain culture” by encouraging writers, artists and musicians to “join in the Zincton effort.”

The proponents have moved their proposed backcountry lodge from an area identified by critics as a prime wildlife corridor to along London Ridge. “The Lodge is now envisioned as an easily-accessible, affordable and inclusive remote backcountry accommodation experience,” the report states.

Many comments were made during the initial public review stage calling on the Province to ensure public access to the backcountry remains secure. Parts of the area have been used by locals and visitors for decades. The proponents promise in the formal proposal that the public will continue to have no-cost access and use of the resort’s backcountry zone. Public use would be managed through a joint committee of resort officials and local user groups.

Concerns about increased traffic and greenhouse gas production were also raised in the initial proposal stage. Zincton says it plans to operate a fleet of electric buses between Kaslo, New Denver and the resort property at Goat Pass to allow travel without the use of private vehicles. “This will encourage exploration of the local communities, reduce vehicular traffic and wildlife interactions on Highway 31A, and reduce the associated greenhouse gas emissions,” the report states.

Zincton’s proponents hired the Cascade Environmental Resource Group to review and comment on the environmental impacts of the project, based on provincial guidelines. Cascade’s overview study “concluded that existing and proven mitigation measures are likely to effectively address any potential adverse effects resulting from the Zincton project,” the proposal says.

The 100,000 annual skier days the Zincton resort supports would create up to 127 direct jobs and about 48 indirect jobs in the region, the report says. That would pump just under $5 million into the local economy through wages.

As well, the project – the village, lifts, trail-making, infrastructure, etc. – is estimated to cost $15 million to develop, creating an additional 115 jobs during the construction period. That would pump an additional $6.5 million into the local economy through the transportation, engineering, construction and forestry sectors.

The fleet of electric buses shuttling visitors to the local communities would also create more economic opportunity, spur housing and commercial development, “evening out the low spots in the economy” after decades of economic decay, the proposal says.

The proponents have also refined their estimates of how many people would access the resort daily. It says the comfortable carrying capacity (CCC) is 1,227 skiers a day – down from about 1,550 estimated in the original proposal. Of those, three-quarters of the users would use the facilities in the chairlift zone, while the rest would be using the backcountry trails.

The proponents note the CCC is only a theoretical maximum of daily users, and the actual number would be closer to three-quarters to half that number. That would make 600-850 daily users on average.

“The calculation of CCC… better represent the realities and expectations of backcountry skiers and the vision of an authentic backcountry skiing experience,” the report says.

The public now has a chance to review the formal proposal and make comment. Zincton will be holding a virtual public open house on the project on October 21 from 5 to 7 pm, and the public can submit written comments to the Mountain Resorts Branch from October 21 to November 22.

“As we move forward through the Formal Proposal review process, we are looking to connect with the people of the Goat Pass region and to build a community of support around the Zincton project,” the proponents state.

You can see the formal proposal and get the link to the virtual open house on the government website. 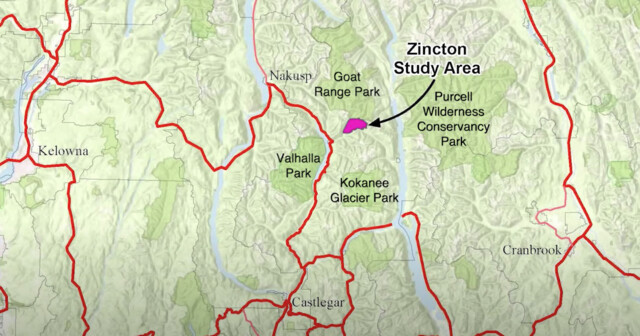