Stephen Kaufmann, aka LingoSteve, has taught himself 20 languages 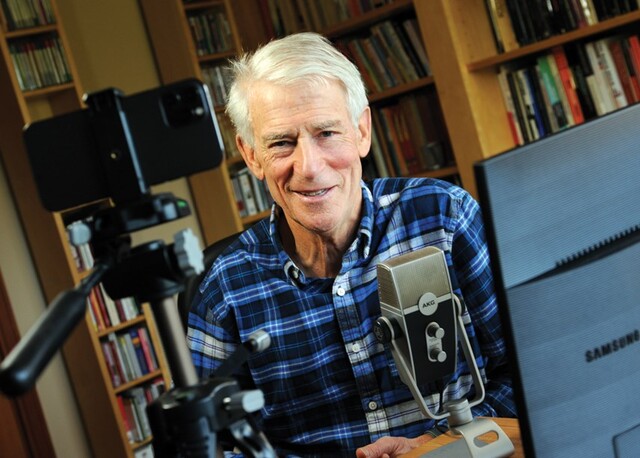 One of West Vancouver’s biggest YouTuber’s won’t show you how to use a glitch in a video game, to draw a perfect cat eye with eyeliner like otherYouTube stars.

Kaufmann is more about casual conversation - as though he’s chatting to friends from his book-lined study.

But Kaufmann’s straight ahead style has earned him an astonishing 445,000 YouTube subscribers by offering tips and encouragement for those trying to do what he himself has done many times over – learn a new language.

Anyone can do it, he says. The key is wanting to do it, plus exposure to the language through listening and reading. “The language has to come into you,” he says.

Over half of those languages, “I could start speaking right now” he says. In others, he could pull off a conversation and understand what was being said, while a few more, he’d need a refresher in.

Korean, Czech, Polish, Romanian and Greek he counts among the latter. “I’d make mistakes,” he says, but “If I went to those countries I’d be fine in a day or so.”

Kaufmann’s own proficiency in languages came through life experiences rather than setting out deliberately to learn them.

“There was no deliberate strategy to become a speaker of many languages,” says the local polyglot, now in his 70s.

Born in Sweden to parents originally from Czechoslovakia, Kaufmann moved with his family to Canada when he was five. In his teens he got interested in French, and eventually moved to France to study at university there.

As a student in the 1960s, he hitchhiked around Europe where he had opportunities to pick up languages like Spanish and German.

After university, he worked for the Canadian government, “and they sent me off to Hong Kong to learn Mandarin Chinese,” he said. Later, he worked for large lumber companies based in Tokyo, Japan.

Part of learning languages is developing confidence, he says.

“People who have never learned another language to fluency, they don’t really think they can do that,” he says. “But once you’ve done that, you get the sense of confidence that you can learn another.”

Typically, languages are considered much easier to learn by children, when the brain is still very elastic. But Kaufmann said adults are still capable of learning. Most of the languages he’s learned have been ones he picked up after the age of 60.

The key, he says, is “you have to be interested.”

Listening and reading are the foundations of learning language, he says, that will be later followed by fluency in speaking.

“The language will come into your brain if you give the brain enough exposure,” he says, pointing to the language-learning theories of linguist Stephen Krashen, a professor emeritus at the University of Southern California.

What doesn’t work, he says, is having a lot of grammar rules forced upon you.

Interestingly, one thing Kaufmann doesn’t advise for language students is going to a foreign country with no preparation and hoping to just “pick it up.”

“You can’t expect random people you meet to be your language teacher,” he says.

These days, Kaufmann provides tips for learning languages both through his twice a week videos on his YouTube channel LingoSteve and on a commercial website, LingQ, he developed with his son.

He aims to make language learning fun and boost confidence, he says.

“The message is one of encouraging people not to get uptight,” he says.

Interestingly, about half of the subscribers are people who are learning English, he says.

Kaufmann says he can’t name the language which was his own favourite to learn, although languages with a different written script tend to be more challenging.

The languages he’s been working on most recently certainly fall into that category: Arabic and Persian.

Those languages were originally sparked by a trip to the Middle East two years ago, he said.

“I said to myself, if I'm going to go to the trouble of learning the Arabic script I may as well learn Persian at the same time as Arabic. So I've been doing both languages.”

Kaufmann said he likes to practice when he goes into Persian shops on the North Shore, and finds people are generally surprised and delighted that he speaks the language.