Locals left out of fire probe 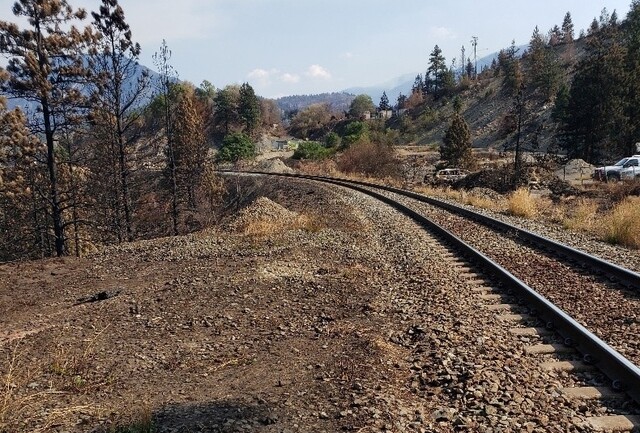 While the Transportation Safety Board has concluded they found no evidence that rail operations caused the massive fire that destroyed Lytton last summer, the organization says they cannot rule out the possibility that a train was responsible. But the TSB did not speak to any Lytton residents during their investigation.

During a press conference Thursday morning, TSB Chair Kathy Fox said their field investigation found “no evidence to conclude that railway operations were involved in this fire,” and as a result, they will not be conducting a more fulsome report about the incident.

The BC Wildfire Service and the RCMP continue their own separate investigations into the destructive fire that left two people dead.

“The police investigation continues to assess if there is possible criminality,” the BC RCMP's Dawn Roberts said in a statement.

“Significant progress has been made in investigation with respect to witness statements, interviews and the collection of both physical and digital forensic evidence that continues to be analyzed. The RCMP does not have a timeline on how much longer the investigation will take, however it remains a priority and we continue to work on the outstanding tasks.”

TSB lead investigator for the investigation, James Carmichael, said the BC Wildfire Service's investigation has found the suspected point of ignition was just five feet from the rail line.

Carmichael noted that video captured of what appears to be a smoking train south of Lytton near Boston Bar, shortly before the Lytton fire was first reported, was determined not to be associated with the Lytton fire.

"We looked at everything we could from there, but we didn't feel that they were associated with each other," Carmichael said. "They were two separate trains from the one we looked at that had been through Lytton, so it was not part of our investigation in the Lytton fire."

While the TSB interviewed railway employees and obtained “other information from other agencies,” no Lytton residents were interviewed for the investigation.

“I'm not going give you specifics,” Fox said Thursday, when asked directly about whether or not Lytton residents were interviewed.

“I think that you're hiding behind the [Canadian Transportation Accident Investigation and Safety Board] Act,” pressed the Toronto Star's Jeremy Nuttal. “I'm asking for the category of the person, residents or no?”

Finally, Carmichael conceded: “We did not have any direct interviews with residents of Lytton.”

Carmichael has previously worked for both CN and CP over a four-year period as a mechanical supervisor, but TSB Chair Fox said the TSB has multiple levels of oversight to address conflict of interest concerns.

“All of our investigators are experts in their field and they come to us typically from industry, because that's where they get the expertise, and we need that expertise,” Fox said.

“But we have very strict conflict of interest rules and guidance with respect to investigators ... There's multiple levels of review that these go through before the TSB issues a report.”

The Transportation Safety Board has found no link between railway operations and the devastating fire that destroyed the village of Lytton this past summer.

In a report published Thursday morning, the TSB says after extensive investigation, the cause of the blaze remains unknown.

Fuelled by strong winds and record-breaking heat, the fire quickly tore through Lytton on the afternoon of June 30, 2021.

While a Canadian Pacific coal train passed through the fire's suspected area of origin 18 minutes before the fire was first reported, the TSB found no evidence the train sparked the massive fire.

Investigators found a “black, carbonaceous coal-like substance,” near where the fire is believed to have started, and consider it a "possible source of ignition." The TSB conducted a lab analysis of the substance and compared it to samples from a locomotive exhaust stack and a rail grinder vehicle, and found the substance had little in common with the train substances.

The report does not conclude what the coal-like substance actually is.

The investigation also included inspecting the train in question, “looking for signs of hot bearings, burnt brake heads, built-up tread, and other potential fire-creating causes.” But nothing out of the ordinary was found.

CN and CP told the TSB that no rail grinding or track work had taken place in the area that day.

Investigators also spoke with railway employees who were were working in the area, but no anomalies were reported.

The TSB also viewed video from the train in question, and once again, no anomalies were found.

The cause of the fire remains under investigation by the BC Wildfire Service, and the RCMP are now conducting a preliminary inquiry to “determine the need for a parallel criminal investigation,” according to the TSB.

Despite the TSB's finding, some who lost their homes and livelihood in the fire have filed a proposed class-action lawsuit against CP and CN Rail, alleging the rail companies are responsible.

The Transportation Safety Board was scheduled to release the results of its investigation today into the "possible relation" between train activities and a wildfire this summer in Lytton.

The fire raced through the town on June 30, killing two people and leaving few buildings undamaged, after a heat wave pushed the temperature up to a Canadian record of 49.6 C in Lytton.

The safety board said in July that it sent investigators to the area to investigate any potential link to trains.

Canadian Pacific Railway said in a statement in July that it found nothing to indicate that any of its trains or equipment that passed through Lytton caused or contributed to the fire, while CN Rail said video footage posted on social media after the fire was not connected to Lytton.

A proposed class-action lawsuit filed in August on behalf of those who lost their homes or businesses in the village alleges CP Rail and CN Rail caused or contributed to the fire.

The allegations have not been proven in court and neither rail company has filed a statement of defence.