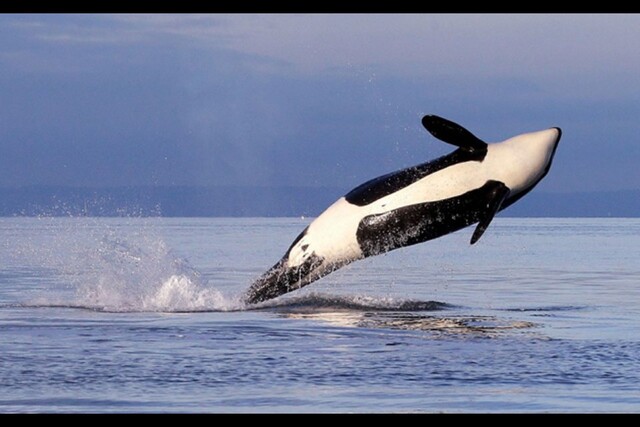 On Thursday, Oct. 7, the group, which includes the David Suzuki Foundation and WWF-Canada, called on the federal government to increase enforcement, prosecutions and penalties to deter any further violations that would threaten the remaining 73 endangered whales.

Under current federal law, the Ministry of Transportation has given special permission to eco-tourism vessels flying a purple “AV” flag to get as close as 200 metres to whales. That doesn’t apply to southern resident populations, and operators have agreed to avoid them.

But according to a report from Straitwatch, a Canadian marine mammal and vessel behaviour monitoring program, those agreements have been repeatedly breached. Over 24 days of monitoring the whales in the summer of 2020, observers documented whale-watching operators breach the 400-metre legal buffer between boats and the whales 84 times across 12 days, notes the report.

"It seems pretty condemning," said Andrew Trites, head of UBC's Marine Mammal Research Unit. "They should be setting the example for others on how boats behave around whales."

Another 51 recreational fishing vessels were observed within 400 metres of southern resident killer whales; of those, 28 came closer than 200 metres.

Southern resident killer whales are among the most threatened orca populations off the B.C. coast. In 2020, the population declined to a 40-year low, more than a 25 per cent decline from their observed peak in 1995, according to the U.S. Environmental Protection Agency.

Part of that is due to the dramatic decline of chinook salmon populations, the southern resident’s preferred prey. This summer, Fisheries and Oceans Canada (DFO) closed salmon fisheries in the southern Gulf Islands until Oct. 31 after the whales' presence was confirmed.

But the whales are also vulnerable to encounters with vessels.

Trites oversaw some of the earliest research studying the effects vessels had on killer whale populations. Twenty years ago, he and a research student Rob Williams tracked orca behaviour in Johnson Strait. They found whales changed their swimming patterns when boats came close.

"It does result in them expending more energy. We suspect it does interfere with the whale's ability to find and catch salmon," he said.

Williams would later go on to help find more evidence noise from boats affected the whales' feeding behaviour and may have contributed to the southern resident killer whale becoming endangered.

And earlier this year, researchers out of Seattle published evidence that killer whales exposed to boat noise within 400 metres dove less often and for shorter durations to hunt for food. In a worrying trend for an endangered population, female killer whales were found to be most heavily affected.

Such mounting evidence has triggered the federal government to declare "interim sanctuary zones" in several areas the whales are known to frequent off Pender, Mayne, Saturna and Galiano Island.

Enforcement of buffer zones for killer whales is handled by DFO’s Pacific whale protection unit, which runs two high-speed patrol vessels out of Annacis Island in Delta and in Victoria.

DFO and Transport Canada were not immediately available for comment. But a DFO spokesperson indicated that the report also found some positive trends emerging.

"By 2020, the numbers of Canadian commercial eco-tour/whale-watch vessels within 400 metres of [southern resident killer whales] dropped by more than 90 per cent compared to 2018," write the report's authors.

Of the 84 times whale watchers were observed within 400 metres of southern resident killer whales, five occurred in Canadian waters, eight occurred in transboundary areas and the rest occurred in U.S. waters, notes the report.

Observers said enforcement has been consistent on the U.S. side of the border over the past three years, making up six per cent of all scanned vessels.

On the Canadian side, however, fisheries enforcement has been present in less than one per cent of the observations over the three years Straitwatch kept an eye on regional waters. In 2020, DFO enforcement was never observed in the presence of southern resident killer whales during Straitwatch’s scans.

"In terms of enforcement, people have relied on Straitwatch to be the eyes and ears out there," said Trites. "I was just surprised and disappointed that’s there’s been so many infractions by whale-watching groups."

What's missing now, he said, is tracking down which companies are responsible.

Boaters caught breaching mandatory sanctuary and approach distances could face up to a $1-million fine and up to 18 months in jail.

In the summer of 2019, a Prince Rupert judge ordered a whale guide to pay a $2,000 fine for getting within less than 100 metres of a humpback whale. The fine represented the first conviction under new Marine Mammal Regulations.

Across Canada, it is illegal to feed, touch, swim or in any way interact with a marine mammal. Tagging or marking an animal, moving it or enticing it to move is also illegal.

Anyone who witnesses such infractions or finds a marine mammal in distress or dead, is encouraged to report it to DFO’s Observe, Record and Report line at 1-800-465-4336 or by email at [email protected]