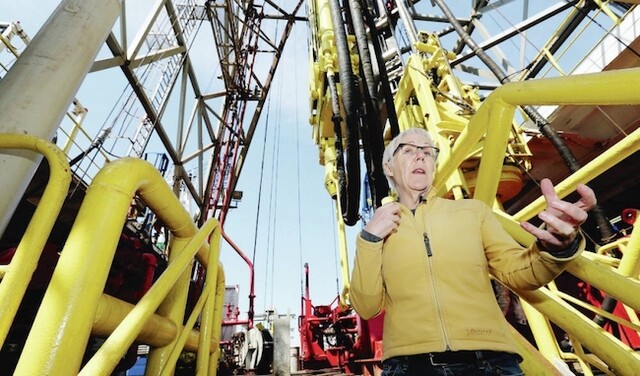 Scientists warn that human-caused greenhouse gas emissions are driving the Earth toward a point of no return when it comes to the dire consequences of climate change.

But what if you could pump those gases into rock deep below the ocean floor?

The University of Victoria and its Pacific Institute for Climate Solutions and Ocean Networks Canada divisions are preparing a demonstration project off the coast of Vancouver Island to do just that. The demo, which could be ready for the Cascadia Basin by 2024, could eventually lead to sequestering gigatonnes of emissions around the globe that are driving climate change.

Technology is now being refined to outfit a floating drilling platform with turbines that would gather carbon dioxide from the atmosphere and push it through a pipe to holes bored into the basalt formation. There, scientists say, CO2 would react with minerals and crystallize into rock over time, with hundreds of metres of sediment acting as a sealant.

Since about 90% of the ocean crust is basaltic rock — a porous formation from cooling volcanic lava — researchers say locking up carbon this way could put a ­“serious dent” in the billions of tonnes of emissions caused by humans each year. It’s currently estimated that human activity adds about 51 gigatons (51 billion tons) of greenhouse gases to the atmosphere each year.

“The potential is enormous,” says Kate Moran, president of Ocean Networks Canada and lead on the Solid Carbon Project. She said many of the systems that will be used in the demonstration already exist, such as the drilling technology, pipelines and injection wells and carbon-capture technology — not to mention human resources in the oil and gas industry.

“Several of those companies see it as a transfer of their business and workers into green businesses,” said Moran, adding a Japanese company has already offered a ship for the demonstration.

It’s estimated a demonstration project would cost between $30 million and $60 million, with private companies stepping up and governments likely to follow, said Moran.

The Cascadia Basin, an area more than 100 kilometres off the coast of the Island on the Juan de Fuca Plate, is one of the most studied ocean floors in the world, said Moran.

The centre of the basin is about 2,600 metres deep and a sub-sea platform by Ocean Networks Canada shows a crust of volcanic rocks under a 200-metre-thick blanket of sediment.

She said decades of government surveys for seismic studies have left existing bore holes that can be used in the demonstration.

The science of turning CO2 into rock is already being used in Iceland, but on a much smaller scale. CO2 is injected in a dissolved state and it mineralizes rapidly, within two years, at shallow depths.

Geo-chemical simulations conducted by scientists at the University of Calgary, a research partner with UVic’s Pacific Institute of Climate Change, have demonstrated that “gigaton-scale” carbon dioxide storage is possible when plumes of captured CO2 are directly injected into deep ocean basalt. There, the CO2 reacts with minerals, and over time, forms a solid carbonate rock.

The results have been published in the Environmental Science & Technology journal.