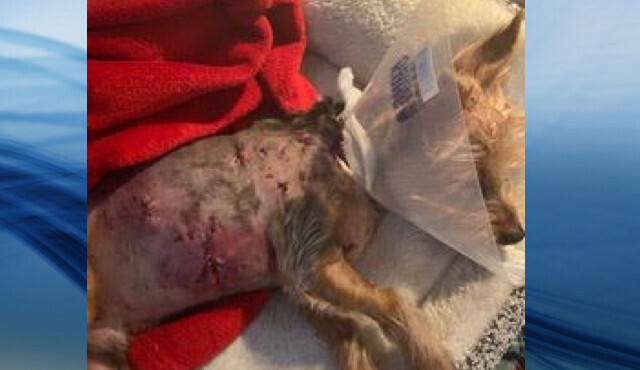 The City of Vancouver has issued a ticket to the owner of two pit bulls after the dogs attacked a Yorkshire terrier while out on a walk earlier this month.

Viviane Roy was walking her eight-year-old terrier Pooky off-leash near Granville Island the afternoon of Sept. 1 when the attack took place. According to Roy’s report to the City of Vancouver’s animal services, the attack lasted seven minutes during which Pooky received wounds all over his body. A week later Roy made the difficult decision to euthanize Pooky as a result of his injuries.

"I am traumatized. I still see all what happened in slow motion,” Roy said in a recent interview with Vancouver Is Awesome. “I'm having a hard time sleeping since all this happened. I'm lost. I'm totally lost."

A spokesperson for the City of Vancouver says an investigation into the incident is ongoing but so far the investigation has found the following: the pit bulls were leashed when one stopped to sniff a bush near Pooky. According to the city’s account, the terrier bit one of the pit bulls which prompted the attack.

“The City considers a number of factors when assessing a case like this. Although the pit bull was not the initial aggressor, it wasn’t under adequate control and this resulted in a loss of life. Our sincere condolences go out to the owner of the Yorkshire terrier,” the spokesperson said in a recent statement.

According to the City of Vancouver’s Animal Control Bylaw No. 9150 an aggressive dog is defined as one “which has bitten another domestic animal or human being without provocation.” Under the same bylaw, an aggressive dog must be muzzled when in public spaces.

When asked if the pit bull that attacked Pooky is considered an aggressive dog under the city bylaws, the spokesperson said the investigation has issued a $250 ticket to the pit bull owner.

In the aftermath of the attack, Roy’s neighbours have rallied behind her helping out with vet bills and sending their condolences.

"I'm very grateful to all my neighbours and friends, people I just said hello to once in a while. Send me an envelope with a card and money. I'm very, very grateful. I had flowers galore in my apartment."

'I just want those dogs to be muzzled'

As for what the city has done thus far, Roy says it's not enough.