Tonnes of plastic pulled from ocean in Victoria-based trials 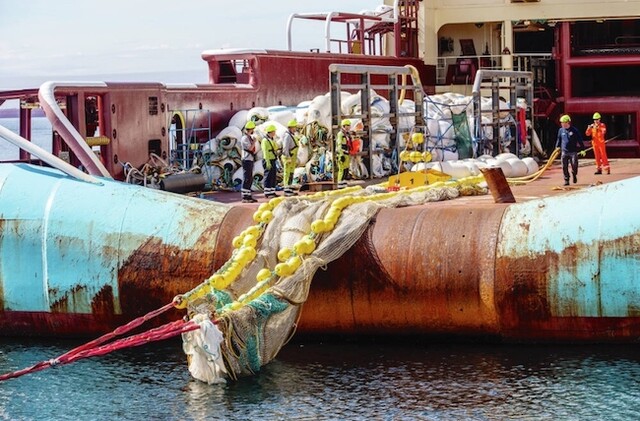 About eight tonnes of plastics have been hauled out of the Great Pacific Garbage Patch in the first of two six-week tests of a new trash-collecting system.

Expedition organizers are hoping to see their system, dubbed Jenny, collect far more plastics from the Pacific in the next phase of their trial.

If all goes well, the system will be able to capture 10 to 12 tonnes of plastic at a time, Joost Dubois, director of communications for The Ocean Cleanup, said Thursday.

The non-profit organization, based in the Netherlands and working out of Victoria's Ogden Point, hopes to clean up 90 per cent of the plastics in the world’s oceans.

The Maersk Tender and ­Maersk Trader ships carried 45 crew to the large stretch of the north Pacific where debris has accumulated and are back in Victoria for a crew change, additional technical work and to package up the recovered ­plastics.

The vessels will return to the patch in coming days and are expected to return to Victoria on Oct. 20.

Boyan Slat founded The Ocean Cleanup in 2013 to develop new technologies to combat the global problem of plastics in the seas. Sea life that ingests or becomes trapped in plastics can die. Plastic also breaks down in the ocean into micro sizes and works its way through the food chain.

Slat said on social media after the first phase of the testing that the system is “behaving well.”

“We see significant amounts of trash coming on deck from the first few short tests that we have done so far,” Slat said.

The Jenny extraction system is 800 metres long and has a three-metre-deep skirt under water to capture plastic under the surface. Various configurations have been tried in the effort to collect a large amount of plastics efficiently without harming marine life.

One goal of testing is to learn whether the system poses any risks for marine life, and to prevent it from being disrupted.

There was a hiccup when the monitoring device for marine life stopped working properly in the first phase of the trial. Tests were halted until it could be fixed, Dubois said.

In the next phase, imitation plastic garbage in the form of buoys will be tagged and ­monitored in the ocean using drones and GPS trackers to see if it’s possible to increase the predictability of how plastic ends up being captured within the system.

Based on what “we have seen so far, we think that within five days we will completely fill it up, and that will bring 10 to 12 tons of plastic on board in one go,” Dubois said.