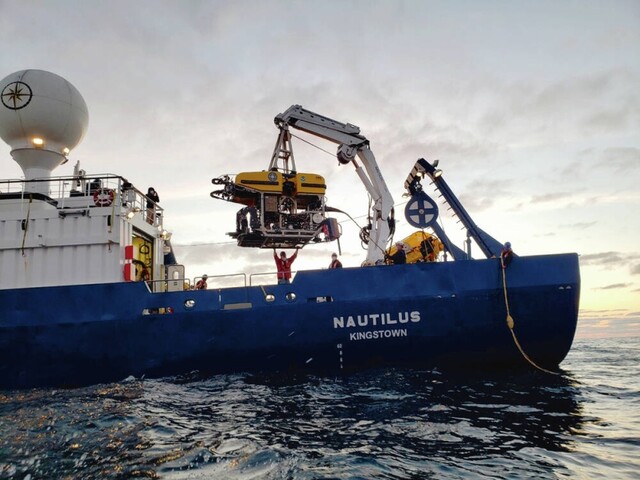 Two errant remotely operated vehicles have been successfully recovered after breaking loose from their tethering cable two kilometres below the ocean surface southwest of Vancouver Island.

They settled on the seabed 2,200 metres below the surface at the Endeavour hydrothermal vents marine protected area on the Juan de Fuca Ridge.

The ROVs were attached by cable to the Exploration Vessel Nautilus, a U.S. ship used by the Ocean Exploration Trust.

The vessel is spending six months travelling along the west coast of North America, from southern California to B.C. waters and west to Hawaii.

Expedition partners include Ocean Networks Canada at the University of Victoria, NASA and Harvard University.

When the ROVs were detached from their cable, Ocean Exploration Trust was three weeks into a four-week expedition to support Ocean Networks Canada’s offshore observatory at the vents.

On Aug. 26, the ROVs Hercules and Argus were in the midst of a dive when they broke free of their cable, which had been attached to the Nautilus. The ROVs remained tethered together as they settled on the seafloor, according to the expedition’s website nautiluslive.org.

The Ocean Exploration Trust team is investigating what caused the break.

“While this is a rare event to happen, this is not the first of these types of situations within the field of ocean exploration and research,” its website said.

The task of retrieving the ROVs was carried out with help from the University of Washington’s Thomas G. Thompson research vessel and Woods Hole Oceanographic Institution’s remotely operated vehicle Jason.

On Aug. 29, the Nautilus pulled into Sidney to allow ­Canadian personnel off the ship and to offload their equipment.

The ship then headed for Port Angeles to gather new equipment. It left Aug. 31 to head back to the site to recover the ROVs.

It was assisted by several other oceanographic research agencies.

The timeline was tight. They had until late morning today to complete the recovery mission due to vessel schedule constraints, the website said.

“The tether between Hercules and Argus will be cut, which will result in Hercules free-floating to the surface to be recovered by E/V Nautilus,” it said. It would be secured by a winch and crane on the ship.

A beacon and extra flotation were attached to Hercules to give it additional buoyancy and to ensure it could be tracked.

Then the straps were threaded through the frame of Argus to make sure it was supported as it was lifted by the Nautilus’s winch and crane.

On Thursday afternoon, the nautiluslive.org site announced that both ROVs had been recovered.

The two dives to survey and recover both vehicles were carried out in close to 26 hours.