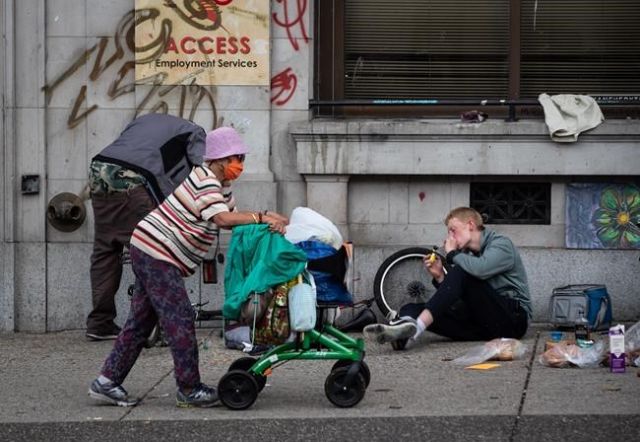 Photo: The Canadian Press
A woman walks past a person using a glass pipe to smoke drugs in the Downtown Eastside of Vancouver, on International Overdose Awareness Day on Tuesday, August 31, 2021. The Canadian Association of People Who Use Drugs has filed a lawsuit in British Columbia Supreme Court seeking to decriminalize the possession of illicit drugs, arguing that criminalization during the overdose crisis violates charter rights. THE CANADIAN PRESS/Darryl Dyck

A group representing drug users has filed a lawsuit against the federal government in British Columbia Supreme Court seeking to decriminalize the possession of illicit drugs, arguing criminalization during the overdose crisis violates charter rights.

The statement of claim filed Tuesday by the Canadian Association of People Who Use Drugs and four individual plaintiffs says drug dependence is well recognized as a medical condition, but criminalization means the toxic illicit market is the only source of most drugs.

It says the illicit drug supply has become increasingly contaminated with the powerful opioid fentanyl and related substances since 2016, fuelling the drug poisoning and overdose crisis that's killing thousands of Canadians every year.

The lawsuit argues criminalization has also created a high degree of stigma, leading many people to use drugs alone and in secret, heightening the risk of overdose.

A statement of defence has not been filed in the court's online search system.

While the attorney general is listed as the defendant, the Ministry of Justice referred a request for comment to Health Canada, which did not immediately reply.

The lawsuit challenges drug possession offences in the Controlled Drugs and Substances Act, asserting that they breach charter rights to life, liberty and security of the person, equality rights and the right not to be subjected to cruel and unusual treatment.

The civil claim, among other things, asks the court to strike down all drug possession offences, as well as certain drug trafficking offences related to subsistence.

More than 21,000 people died of drug overdose in Canada between 2016 and 2020, the lawsuit says. It asserts that many of the deaths could have been prevented with a combination of decriminalization, a safe drug supply and harm-reduction services.

The City of Vancouver has requested an exception to federal law to decriminalize the possession of particular amounts of certain drugs for personal use, but Health Canada has yet to approve the request. The City of Toronto and the B.C. government have also backed decriminalization, while the lawsuit seeks an end to the prohibition across the country.