British Columbia is in the midst of a “pandemic of the unvaccinated,” according to provincial health officer Dr. Bonnie Henry.

The provincial government released a wave of data Tuesday showing how the COVID-19 vaccine is working in B.C.

“A modest increase in the total immunization rate in the eligible population makes a tremendous difference both in bringing cases down, but also hospitalizations,” Henry said.

In the Central Okanagan, which has been B.C.'s coronavirus hot spot for the past several weeks, case rates have finally levelled out, albeit at a high level.

For the past month, 50 per cent of B.C.’s cases have been detected in the Interior Health region despite it having just 15 per cent of the population.

“So we can see how pockets of lower immunization and higher transmission can really affect what we are seeing across the board," Henry said.

There are now 176 people hospitalized with the virus in B.C. and 91 people in intensive care. Those figures are similar to what the province saw last spring and still not cause for alarm, say health officials.

Deaths continue to occur mostly in the very old and in long-term care settings.

While other parts of the Interior Health region are now seeing a surge in transmission, overall, the BC Interior’s R-value is now the lowest of all health regions. The R-value is how many many additional cases each infection causes. In the BC Interior, it is sitting at one. Any higher, and case counts will grow quickly.

“We're flattening out the rate of transmission and we see that in the numbers even though they're very high. They're no longer growing and doubling in the short period of time,” Henry said.

Health Minister Adrian Dix said since the announcement of the province’s vaccine passport program set to roll out of Sept. 13, they have seen “significant” increases in vaccine uptake.

“Particularly among those under 30, who have increased in the last weekend twice the provincial average and disproportionately the highest uptake in Interior Health and Northern Health where we’ve seen previously lower rates of vaccination,” Dix said.

He added that people aged 18-24 are getting vaccinated at a rate highest of any age group under the age of 55. 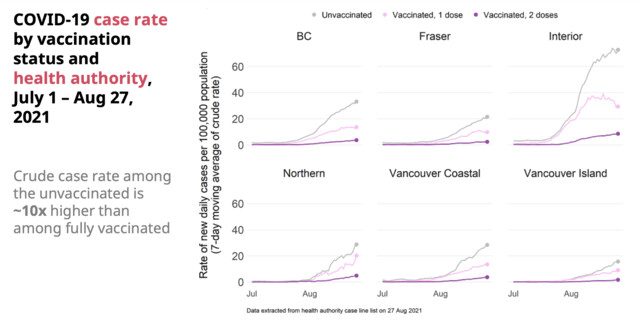