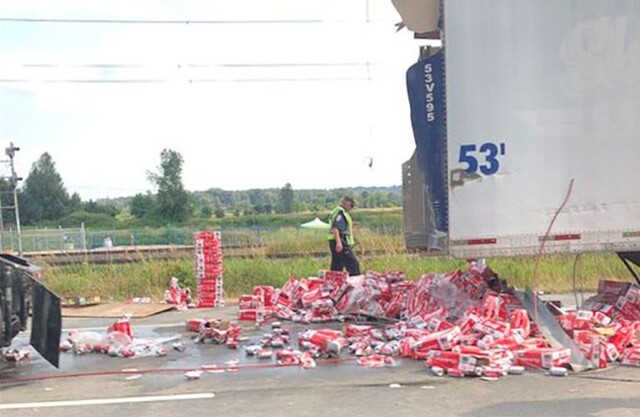 Beer lovers and commuters were treated to a sudsy sight when a truck with a broken trailer dumped hundreds of cases and cans of Budweiser on the eastbound side of Lougheed Highway in Coquitlam on Tuesday.

The incident was first reported around 1:30 p.m. near Colony Farm Road.

Coquitlam RCMP confirmed there was no collision that took place and no injuries were reported.

"My mom and I just thought it was funny, couldn’t believe our eyes," said Brianagh O'Driscoll.

The truck appeared to be carrying several pallets when part of its trailer somehow split open.

Coquitlam RCMP confirmed this was because the truck had separated from its trailer while driving on Highway 7, which caused its load to tumble out onto the road.

Police blocked the right lane for several hours while crews worked to move the sudsy mess.

The section of Lougheed Highway eventually reopened after 10 p.m.