Coquihalla closed: pair of wildfires burning along Hwy 5 become one 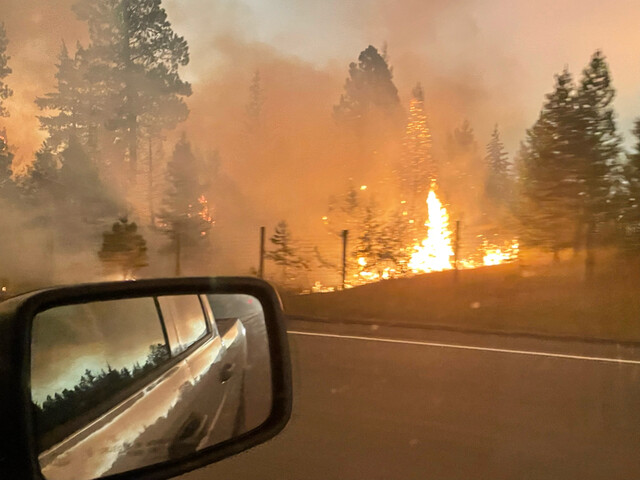 The BC Wildfire Service now lists the July Mountain fire at 20,860 hectares.

The new size was mapped from the air today by aerial crews.

July Mountain merged with the Brook Creek fire after jumping the Coquihalla highway Sunday, forcing the closure of the route. Highway 5 remains closed between Merritt and Hope.

DO NOT travel to areas affected by #BCWildfires for non-essential reasons.
People in those communities need to be able to evacuate, if needed, and access supports.
If you had plans, please change them. Instead, visit somewhere in BC your presence won’t strain local resources. pic.twitter.com/nikni3Urg8

The BC Wildfire Service says a pair of wildfires that forced the closure of the Coquihalla Highway have now merged.

The July Mountain and Brook Creek fires are now being managed as one blaze.

The combined fires have burned 8,000 hectares and continue to see “significant growth in the northern and north eastern flanks.”

There are now 130 properties on evacuation order, and many more on alert, due to the fire.

Fifty-seven firefighters are assigned to the blaze, supported by helicopters and heavy equipment.

DriveBC, continues to have no estimated time for the Coquihalla Highway between Hope and Merritt to re-open, the highway remains closed until further notice after flames cut the route late Sunday.

Strong winds fanned many of the nearly 270 fires currently burning in B.C., including more than 30 considered highly visible or a threat to life and property.

"This weekend, we absolutely got impacted by the weather event that we were forecasting and talking about and giving all the heads-up notices on," Kekula says.

Environment Canada is calling for showers over some of the areas where the most aggressive wildfires are located, including Kamloops, Kelowna and Vernon, but forecasters say any rain could also include lightning, increasing the potential for further fires.

The Coquihalla remains closed in both directions because of wildfire activity.

DriveBC has just issued the latest closure update, indicating Highway 5 is closed in both directions due to wildfire closure between Exit 202 and Exit 286: Merritt for 83.3 km, 1 km south of Merritt to 10 km south of Great Bear Snowshed.

DriveBC indicates the wildfire is dangerously close to the highway and it is also creating limited visibility due to all the smoke.

DriveBC is recommending people detour via Highway 1 and Highway 3 and they don't anticipate the situation to change over the coming hours, the next update is scheduled for 1 p.m. Monday afternoon.

The Coquihalla Highway remains closed Monday morning between Merritt and Hope due to wildfire activity in the area.

The Coquihalla has been closed between Merritt and Hope Sunday due to the July Mountain fire, which is burning on both sides of the highway.

Drivers are being asked to use Highway 3, or Highway 1 as an alternate route.

The Trans-Canada Highway was closed for much of the day Sunday due to a rock-slide near Lytton.