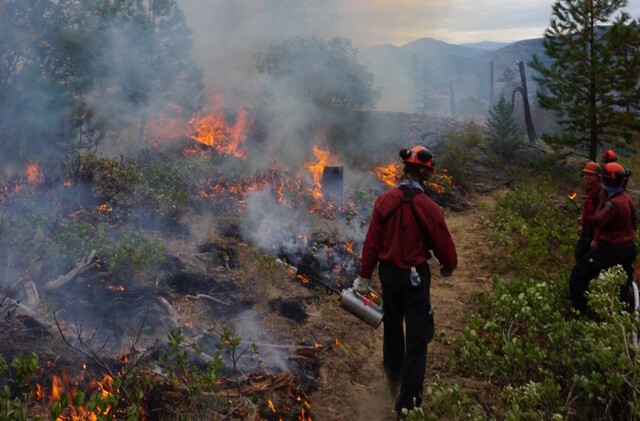 The B.C. Wildfire Service says planned ignitions at the Deka Lake fire did not take place Sunday as planned due to wind.

"It will be conducted at a later date when conditions are suitable," the agency said in a brief statement.

Wildfire crews are planning to conduct a controlled burn on the Deka Lake wildfire Sunday, using both hand ignitions and helicopters.

The Deka Lake wildfire was sparked Wednesday during a thunderstorm in the area, north of the massive Sparks Lake fire, and it's now burning in a 300-hectare area.

The lake is a popular vacationing spot and there are many cabins and homes in the area. The fire has forced the evacuation of 693 properties, and an additional 153 in the Sulphurous Lake area are under an evacuation alert.

Saturday morning, the BC Wildfire Service announced they plan to use some controlled burns on the fire Sunday, if conditions allow.

“The goal of this operation is to remove the available fuel between the fire's edge and the fuel free guard,” the BCWS posted on Facebook.

“This strategy slows down and helps limit the spread of the wildfire by decreasing the amount of fire perimeter that must be managed by BCWS staff.”

The BCWS says increased smoke will be visible in the area as a result of the burns.

“We do not take doing these operations lightly,” the BCWS said. “A Burn Boss has reviewed the burn plan for this controlled burn and we will not go through with this operation unless conditions are suitable.”

On Saturday, there were 40 firefighters working on the blaze, along with support from three helicopters and five pieces of heavy equipment.