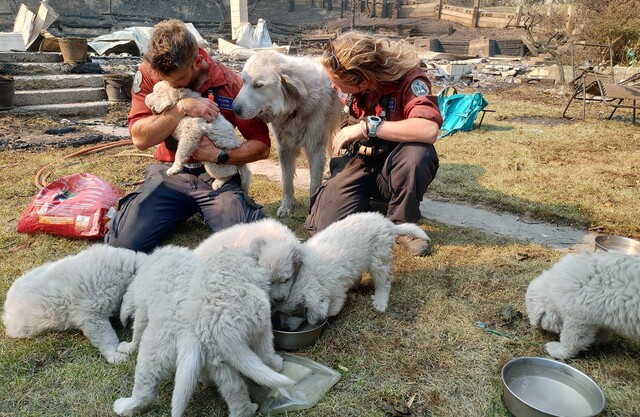 Seven puppies and their mother are safe in Lytton, after a few BC Wildfire Service firefighters stopped by Saturday to check on them.

“We managed to get access to your property and made contact with the animals,” von Sacken wrote. “All seven pups are OK and in good spirits, adult dogs too (although the mom was a bit tired).”

Von Sacken and his colleagues found fresh water for the dogs, and left them a bag of puppy chow.

“[We] even scrounged a few marrow bones and kibble for the adults,” von Sacken said, adding they'll be back to check on them Sunday.

There are also alpacas and sheep on the property, and von Sacken and his crew left them with a bag of alfalfa pellets and replaced their water.

Since Lytton residents were forced to flee their homes without any notice, many were forced to leave their pets and livestock behind. Now, residents are wondering when they can return to their animals.

“We will be speaking with our ops team about getting folks back in to see to their animals but unfortunately [we] are not personally authorized to make that call, but we'll try our best for you guys,” von Sacken wrote.

Along with those they've been working to protect over the last few days, Von Sacken and his colleagues have also experienced loss. They're members of the Lytton Rattlers, a BC Wildfire Service crew who are based out of Lytton through the summer months.

“My nephew and his crew were working to fight the fires when they found out that the order to evacuate was given,” wrote Terry Chui, von Sacken's uncle.

“They continued to work and unfortunately the wildfire spread into town. It has been very stressful for the crews as they tried to save the town, but many properties have been lost. The fire crew's personal belongings have also been lost to the fire.

“Communication has been spotty, due to poor reception but we heard back late [Wednesday] night that my nephew and his crew made it to safety, but everything they owned has been lost.”

Chui has organized a GoFundMe page to help von Sacken and his colleagues replace what they've lost. As of Saturday evening, 186 people had raised close to $20,000.

“On behalf of myself and the rest of the Lytton Rattlers Unit Crew and Initial Attack Crews, I cannot thank you all enough for this unexpected generosity and kindness,” von Sacken wrote on the page Saturday.

“We have been working hard to save the outskirts of Lytton and prevent the fire from heading further north.

“We are not leaving Lytton. We can’t. This is home for us for the season. We have all walked in the same streets, shared laughs at the same swimming holes and meals at the same tables. However, knowing that we will have some support when there is time for us to put our lives back together is a great relief and we thank you so, so much for everything you are doing to help us.”

At least two people are believed to have been killed when the fire tore through Lytton. MP Brad Vis said about 90 per cent of the village was destroyed.

The fire is now estimated to be 8,732 hectares in size, with some growth along the fire's north flank on Saturday.