Fleeing ‘Q’emcin aka Lytton from 2 Rivers Remix Society on Vimeo.

The school administrator of the Stein Valley Nlakapamux School on First Nations land directly north of Lytton posted to Facebook late Wednesday that “our poor little town of Lytton is gone.”

Edith Loring Kuhanga, who earlier in the day was interviewed by the CBC about the record temperatures reached in the community over the past three days, said she was at home on Fraser Street when the fire broke out and “quickly spread.”

“One of the board members who is a Council member called me and asked me where I was. I told him that I was at the house. He said you need to leave right away as the fire is quickly spreading,” she wrote.

“I ran out the door and there was a huge explosion and the fire really started going crazy! I suddenly realized that I didn’t have my purse so I ran back in and got it.”

In her post, she said she rushed to her school to set up a muster station and started gathering water and making food for evacuees.

They were then forced to flee the school as the fire spread.

“We loaded everyone up in our vehicles and started driving to Lillooet — we had no power or internet in Lytton and everyone was trying to reach people.”

“This is so devastating - we are all in shock! Our community members have lost everything. I understand our Band office is also gone!”

The mayor of Lytton says it’s unclear at this time if everyone was able to escape the inferno that tore through his community.

In an interview with CTV News, Jan Polderman said it “took about 15 minutes” for the fire to engulf the entire town.

Polderman said he picked up one man before driving away from the burning village.

"I'm just hoping that all the residents got out," he told CTV, adding he wouldn't be surprised if the fire has completely destroyed the village.

The Thompson-Nicola Regional District has issued evacuation orders and alerts for a large area to the north of the fire.

Residents on the east side of the Fraser River have been ordered to evacuate while those of the west are placed on alert. A map of the impacted areas can be found here.

“Emergency crews are doing everything they can to support the people of Lytton,” he tweeted Wednesday night.

Scott Hildebrand, chief administrative officer of the Thompson-Nicola Regional District, said the evacuation order for the village of 250 residents was issued as soon as possible.

"It didn't matter because people were already fleeing," he said, adding smoke blanketed the area within minutes and structures were burning as residents left.

Hotel rooms around the area were already booked by people seeking relief from the heat wave and by those getting away for Canada Day as most COVID-19 restrictions in the province were lifted, as well as by crews working on a pipeline project, Hildebrand said.

He said about 1,000 people in First Nations communities may also be ordered to evacuate, but it was hard to get in contact with their local governments.

"It happened so quickly that we're struggling to connect with everybody because power is down, cellphone lines are down. It's a tough situation."

Hildebrand said a reception centre has been set up in Kamloops but some people may have gone to Merritt or Boston Bar.

"That direction was the safest, I think. That's part of our struggle now is that we don't have people registered and we don't understand exactly where everybody went."

Telus said on Twitter it is working to restore cell phone service to the area as quickly as possible. Evacuated Telus customers are also being offered billing credits and free data overages.

MLA for Fraser-Nicola Jackie Tegart said on Twitter she is hearing reports of “catastrophic damage” to the village of Lytton.

“Praying everyone has made it out safely. I am waiting for a briefing from BC Wildfire Service and will share new information as it’s made available,” she tweeted.

Erica Berg, a provincial fire information officer, says they are bringing in resources from all over the region.

Hearing reports of catastrophic damage to the town of #Lytton. Praying everyone has made it out safely. I am waiting for a briefing from BC Wildfire Service and will share new information as it’s made available. Please follow @BCGovFireInfo for the latest info and stay safe. 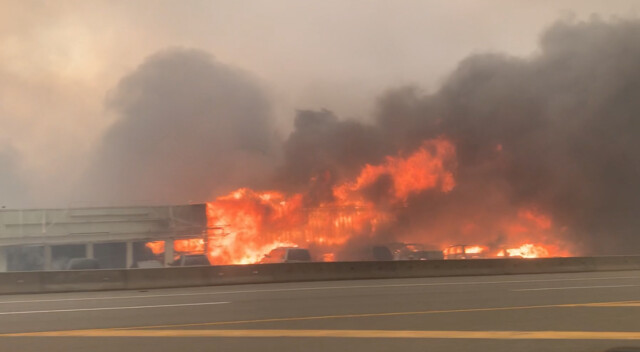 An evacuee reception centre has been set up in Merritt.

The Emergency Social Services building at 1721 Coldwater Avenue has opened for those fleeing the flames in Lytton.

"Any Lytton evacuees in Merritt must register at this centre. Lodging and incidental support available for 72 hours on request," the City of Merritt said on Twitter.

The B.C. Wildfire Service has so far been unable to provide details on the fire that is burning through Lytton.

Erica Berg, a provincial fire information officer, said the evacuation order was issued about an hour after the blaze began but she did not know the size of it.

"We're in intense response mode so our main priority is getting resources to the area," she said.

An interview with the CBC when he said " the whole town is on fire," Lytton mayor Jan Polderman described a wall of flame moving through the community.

"I drove through town and it was just smoke, flames, the wires were down," he said.

An evacuation order has been issued for the entire Village of Lytton.

"A fire event located within the Village of Lytton is threatening structures and the safety of residents within the municipality…..All residents are advised to leave the community and go to a safe location," the evacuation order reads.

Information regarding Emergency Support Services will be announced as it becomes available.

Mayor Polderman has told the CBC “the whole town is on fire.”

Reports are coming in of a forest fire burning right in the Village of Lytton.

A wildfire has been burning nearby for a number of days.

Several social media posts indicate most of the town has been evacuated.

Highway 1 is closed in both directions through the community, according to DriveBC.

The BC Wildfire Service is gathering information.