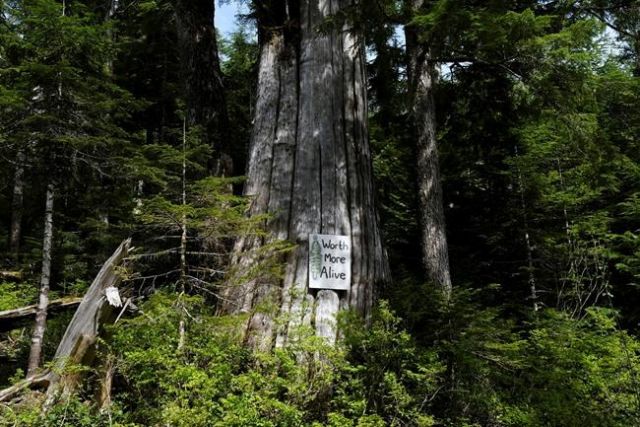 Photo: The Canadian Press
A sign posted on a dead tree on the Bugaboo, a logging road in the Fairy Creek area near Port Renfrew, is shown on May 11, 2021. THE CANADIAN PRESS/Jen Osborne

RCMP say in a release that seven of the people they arrested Saturday were in violation of an injunction ordering them off the land in the Fairy Creek area.

They say the eighth person is accused of assaulting police.

Police say two of those arrested were minors.

Meanwhile, opponents of the old-growth logging say they ended their week-long hunger strike on Saturday, though they did not get to meet with British Columbia Premier John Horgan or federal Environment Minister Jonathan Wilkinson as requested.

But Extinction Rebellion spokesman Zain Haq says he and the other two hunger strikers were happy to receive a call from the leader of B.C.'s Green party, Sonia Furstenau.

Earlier this month, the B.C. government approved the request of three Vancouver Island First Nations who wanted old-growth logging deferred in their territories for two years, but the protests are continuing.

The RCMP began enforcing a B.C. Supreme Court injunction ordering the removal of blockades and protesters at several sites on May 17.

They have so far arrested 254 people who they say are violating the injunction.